For many years people have known that there is water on mars, in its solid state at least. Furthermore, Mars’ extremely thin atmosphere has served to preserve the various topographical grooves that prove that there was ONCE liquid water on mars and that it flowed quite freely. 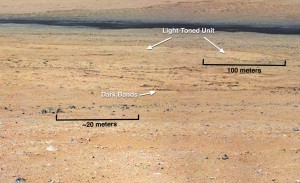 What piqued scientists’ interest was the discovery just a few months ago that some of these grooves, the smaller ones usually only 5 meters wide, would appear during Mars’ warm season, grow several hundred meters long, and then disappear when the climate turned cold. Additionally, the streaks often showed up on steep slopes and looked very similar to images of water flowing downhill on Earth’s surface. 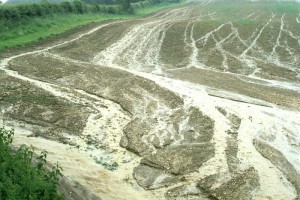 The anomalous nature of these ephemeral grooves compared to the extremely wide ancient river pattern on Mars’ surface, led researchers to further investigate these sites.

The Mars Reconnaissance Orbiter (MRO) now equipped a new instrument used for the spectroscopic detection of minerals, meaning that it carefully takes pictures of the surface of an object in various wavelengths of light (x-ray, ultraviolet, etc.) in order to reveal higher levels of specific compounds and minerals, was the exact instrument for the job. In this specific case, researchers used the MRO to scan for salt in the unusual streaks.

I’m glad you asked… Scientists have decided that, based on Mars’ surface samples, any salts on Mars’ surface must be magnesium perchlorate, magnesium chlorate, and/or sodium perchlorate; all of which are minerals that suggest that water could’ve been absorbed into the soil* from the atmosphere, via deliquescence, or from below the surface in an aquifer. When the MRO detected those salts and perchlorates in the streaks it was a definitive “Yes” to the question of, “Is there still LIQUID water on Mars?” 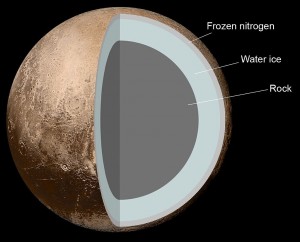 A hypothetical artist’s rendering of how big the aquifer could be on Mars. The Mars rover failed to detect the buried water because it was both extremely deep, and covered by a thick layer of frozen nitrogen.

The significance of liquid water on Mars is that, in the event that human’s travel to Mars, they would be able to begin growing plants. Plants that would not only provide them with food but also the most necessary commodity humans need to survive, oxygen. Plants need four main ingredients to survive: water, sunlight, nutrients from the soil and carbon dioxide. Up until this point, water had been the only missing piece to the puzzle, as Mars’ atmosphere is almost 95% carbon dioxide and is so thin (about 100 times thinner than that of Earth) it obstructs very little solar radiation [sunlight].

Equipped with my Celestron Powerseeker, my family and I took every opportunity we could to look into the depths of space, or at least the depths of our celestial neighborhood. We watched intently as the full lunar eclipse and the blood moon converged overhead. We spectated as the ISS sped across the sky in about 30 minutes on a cloudless night. When I first saw on Yahoo News that NASA had confirmed that there was liquid water on Mars, I was both excited at the new discovery and puzzled as to why everyone was so excited… anyone who has seen a picture of the planet already knew that Mars has water in the form of ice at it poles. Overall, my fascination with space led me to topics such as these. Although hundreds of questions were answered for me, many still remain:

Will NASA attempt to send humans to Mars? If so, when and where can I buy my ticket?

Will further studies find living organisms such as bacteria and protists in these water-streaks?

How big is the aquifer that the streaks could’ve originated from?

Will NASA attempt to establish a colony in Mars? If so, will the first infants born on Mars be considered “Martians”?