Researchers in The National University of Singapore discovered how fish create their chevron pattern.

The chevron shape itself and the shape’s function in locomotion have been used to infer the evolutionary relationships among chordates. However, the development of the chevron has not been fully researched until now.

The research team mainly focused on the myotome, a group of muscles forming the spinal nerve root in fish. These muscles make up most of the fish body and help them become more efficient with side-to-side swimming motion. The myotome creates the “V”  pattern, or chevron pattern, in fish, which helps them increase their swimming efficiency.

One factor that determines the shape of fish is the friction and stress of their muscles. When the myotome first develops in fish, it forms a cuboidal shape before it deforms into a V shape. Dr. Sham Tlili and Professor Timothy Saunders, head researchers of the project, used zebrafish embryos to examine the deformation process of the myotome from a cuboidal to V shape. Developing myotomes in embryos are connected to embryonic tissues, such as the notochord, and each connection has a varying level of friction. The researchers discovered that the sides of the myotome experience more friction than its central side. 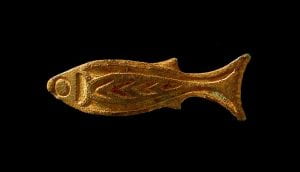 Picture of chevron pattern on fish

The team also revealed that cells of growing myotome become longer as muscle fibers are formed. This elongation incites a force, which is what creates the “V” pattern on fish.

Professor Peter Wainwright, a biological professor in UC Davis, also determined that patterns of fish could be split into two groups: midwater fish and deep water fish. “As you get down into the water column, when you have more substrate and more complexity in the habitat, you definitely find more variation and elongation,” said Susman, one of Wainwright’s students.

Professor Saunders, when asked about the results of the experiment, states that  “This work reveals how a carefully balanced interplay between cell morphology and mechanical interactions can drive the emergence of complex shapes during development. We are excited to see if the principles we have revealed are also acting in the shaping of other organs.”