Always Sick? It may not be your fault 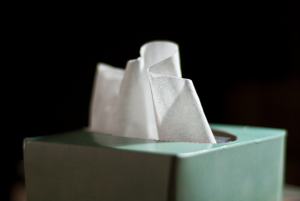 I feel like I get sick more than most of my friends. I always come up with excuses as to why I am sick like: “I must have caught it from my sister”, “I’m just really stressed” or “my lack of sleep lowers my immune systems ability to fight off infection.” But now I have a new excuse: my genes.

A recent article immediately peaked my interest because it may not be my fault I am more susceptible to illnesses. An experimental study involved seventeen healthy individuals who were infected with a strain of seasonal flu (H3N2). Nine out of the seventeen got sick. The researchers drew blood before the individuals were infected and every eight hours for the next five days. Then examined the activity of 22,000 genes in each blood sample. Patterns in gene activity could predict how sick people would get.

Our immune systems respond to “foreign invaders.”  Surprisingly  the immune systems of the people who got sick and did not get sick acted similarly. Those who got sick activated “immune chemicals” that trigger inflammation and stress responses, and those who did not get sick still had an active immune response but “repressed the stress response [and] activated anti-inflammation and antioxidant genes.”

This study illustrates that gene activity analysis might be able to help doctors determine the patients who are in danger of getting seriously sick.

Despite these findings I think the researchers need to determine whether the different patterns of responses depend only on a persons genes. In this study in particular the properties of the specific virus that the individuals were infected with could have played a role in the findings, and maybe a different strain of flu would yield different results.

Still, the next time I get sick I might be blaming the genes I inherited. Thanks Mom and Dad.

Laugh Until It Hurts!