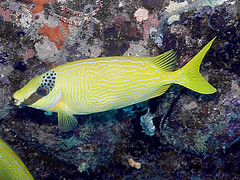 The scientists conducted their study by examining 1000 kilometers of coastline in the eastern Mediterranean specifically Turkey and Greece. Both places two separate species of rabbitfish have come to inhabit. The two areas focused upon were warm and cold regions. In the warmer regions the rabbitfish were present while in the colder regions they were not. The warmer regions filled with rabbitfish had a much lower abundance of seaweeds, and were mostly barren rocky bottoms. On the other hand the colder climates had a thriving ecosystem. There was a 60% reduction in algae and invertebrates and 40% reduction in overall species present in the warm rabbitfish filled environment. After filming rabbitfish as well as indigenous species scientists realized that rabbitfish didn’t actually eat more algae than other fish. However, the distinction was that rabbitfish ate both young and adult algae while indigenous species only ate adults. Eating the young and growing algae before it has a chance for reproduction quickly reduces the overall population.

This topic interested me not only because of my love for marine biology, but also because marine sustainability is extremely important to humans. Without oceans there would be no human life on Earth. The abundance of water is what separates a lush green planet like Earth from the rest of the planets in our solar system. In addition the marine ecosystems are very important, and there have become more and more invasive species due to changes in the environment. Fish such as the rabbitfish threaten whole ecosystems as well as hundreds or even thousands of species that rely on those ecosystems.

Should humans attempt to stop this infestation of rabbitfish? If so, what should be done?