Tardigrades and a New Species!

If you’re a biology lover like myself, you probably spend a good chunk of time before you go to bed every night wondering, “When are we going to find a new species of tardigrade?” Well, you’re in luck, because recently a new species of tardigrade, the Echiniscoides wyethi, was discovered. For those of you who don’t know what tardigrades are, they are water-dwelling micro-animals with eight legs.  Tardigrades are incredible creatures because they can survive in some of the most extreme environments, including temperatures ranging just above absolute zero to over 100° Celsius. These tough creatures are often called “water bears”, and many scientists will tell you they look similar to a hippopotamus- although on a much smaller scale. Tardigrades also can survive for over 10 years without food or water. When they go into these long periods of not eating or drinking, called desiccated states, their water contents can drop below 1% of normal. They are able to do this because of their high trehalose levels. Trehalose is a disaccharide sugar, which protects their cell membranes. This state is known as a cryptobiotic state. Tardigrades in this state are known as Tuns. Tuns have been sent to space; the European Space Agency once conducted an experiment in which they sent Tuns to space and exposed them to harsh solar radiation as well as the vacuum of space- two thirds of the tuns survived the conditions. The new species of tardigrade was found near Allen Island in Maine. It is named the Echiniscoides Wyethi, named after the artist Andrew Wyeth and his family, who own the island. The species measures about one-sixteenth of an inch, and has been described as looking like a “gummy bear” under a microscope. Delicious, however, due to its size, it can’t be too filling! 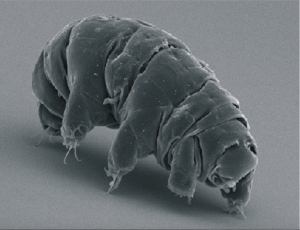