A Gene Mutation that Keeps You Awake and Functioning for Longer

Could a gene mutation really allow someone to finish college in two and a half years? The answer is yes! We all wish we could get by a function perfectly, or even better than normal, on less sleep. This is a reality for some, specifically people with a rare gene mutation. I saw an article titled, “Why Do Some People Need Less Sleep? It’s in their DNA,” and I thought this was a rather interesting topic, because I have never heard of less sleep ever being a positive thing. I am interested to see more research on this, and the possibility of it being an added benefit for others. It prompted me to think about whether or not this is something I would want, considering some of the implications.

People with this gene mutation can get significantly less sleep than recommended for function, as little as three to four hours—without suffering any health consequences and while actually performing on memory tests as well as, or better than, most people. There is now a new study correlating to a new genetic mutation found with these “powers,” after previous studies revealed other types of mutations that may impact sleep. 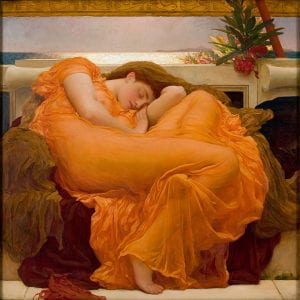 We all wish we could sleep this glamorously and function perfectly…

HOW DID IT START?:

To understand this rare ability when presented to them, scientist Ying-Hui Fu and her team, at the University of California, San Francisco, in 2009, began this study on some individuals, but also on mice, to simulate a similar sleep equilibrium to humans. After a woman came in claiming she was functioning at a high level on very short sleep time, scientists needed to understand, as lack sleep is typically correlates with health issues such as risk of heart attack, cancer, or even Alzheimer’s. They initially found a small mutation in the DEC2 gene, a transcriptional repressor (hDEC2-P385R) that is associated with a human short sleep phenotype. According to UCSF, DEC2 helps regulate “circadian rhythms, the natural biological clock that dictates when hormones are released and influences behaviors such as eating and sleeping. This gene oscillates this particular c schedule: rising during the day, but falling at night.” The newer study reveals that the DEC2 gene lowers your level of alertness in the evening by binding to and blocking MyoD1, a gene that turns on orexin production, a hormone involved in maintaining wakefulness. Fu says the mutation seen in human short sleepers weakens DEC2’s ability to put the breaks on MyoD1, leading to more orexin production and causing the short sleepers to stay awake longer.

In a new study, released on October 16, 2019, by Science Translational Medicine brought on by a mother and daughter duo, mice were studied again to mimic the human sleep pattern. The mice again required less sleep, and were able to remember better. In the study, researchers identified a point mutation in the neuropeptide S receptor 1 (NPSR1) gene responsible for the short sleep phenotype. The mutation increased receptor sensitivity to the exterior ligand, and mice with the mutation displayed increased mobility time and reduced sleep duration. Even more interestingly, the animals were resistant to cognitive impairment induced by sleep deprivation. The results and findings in the study point to NPSR1 playing a major role in sleep-related memory consolidation. NSPR1 is a gene that codes for a brain receptor that controls functions in sleep behaviour and awakeness. In the new study, when mice were given this gene mutation, there were no obvious health, wellness, or memory issues over time. Although the family members did not appear to experience any of the negative effects of sleep deprivation, the researchers make sure to emphasize that longer term studies would be needed to confirm these findings.

WHAT DOES THE FUTURE HOLD?:

In the future, a possible drug could be produced to synthesize a change in one of these genes, as a possible treatment for insomnia or other sleep disorders. We would need a lot more research about their functions, though, because of possible negative neurological side effects.

If a medication with these powers were to exist, do you think it would cause social issues regarding some  possibly forcing certain individuals to take it to work longer hours/get more done? Do you think that it should be available to everyone, or only people with certain conditions? Comment about this below.

How did butterflies evolve to eat poison?!