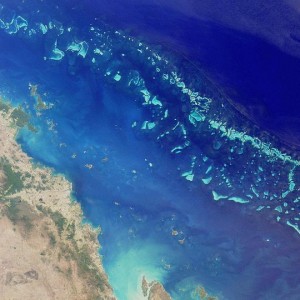 A new marine biological study conducted in Australia shows a correlation between rising ocean acidification levels and declining coral growth rates in the Great Barrier Reef. Scientists Ken Caldeira and Jacob Silverman carried out research testing growth rates from samples of current coral on the reef and records from the 1970’s. The findings were astounding. According to the comparison, coral growth rates have declined by almost 40% since the 1970’s and the scientists believe they have an explanation.

Coral produce their exoskeleton by utilizing aragonite, a naturally occurring calcium carbonate (CaCO3). This process is called calcification. However, when acid levels in the water become too high, the environment for producing healthy coral becomes compromised. Since the beginning of the Industrial Revolution about one third of all CO2 released into the atmosphere has made its way into the oceans. This lowers the Ph, causing the water to become more acidic, and creates an environment ill suited for coral growth. The scientists speculate that this acidification of the water is whats leading to decreased growth rates in not only coral, but also many other species of marine life.

Coral plays a vital role in underwater ecosystems, providing food sources and shelter for nearly 25 percent of all marine life. Some reefs admired and studied by scientists today began growing nearly 50 million years ago. There is no question that coral’s role is vital in the fabric of the ocean. However, recent studies similar to the research done by Caldeira and Silverman are prompting scientists to worry deeply about the future of our oceans. When quoted on the status of reefs today, Caldeira stated, “Coral reefs are getting hammered. Ocean acidification, global warming, coastal pollution, and overfishing are all damaging coral reefs. Coral reefs have been around for millions of years, but are likely to become a thing of the past unless we start running our economy as if the sea and sky matters to us very soon.”