For the first time an infant was cured from HIV virus as in, the child does not have “detectable levels of virus” and there are “no signs of disease without the antiretroviral therapy.” The child’s mother with diagnosed with HIV gave birth to her child that also had HIV which was confirmed when she was born. Doctors immedietly began a regiment of a “liquid antiretroviral treatment consisting of a combination of three anti-HIV drugs: zidovudine, lamivudine, and nevirapine.” This treatment was continued for 18 months. It is also noted that by day 29 the amount of infant’s viral load had fallen to less than 50 copies of HIV per milliliter of blood (copies/mL).

HIV is spread via blood, semen and vaginal fluids and breastmilk making children with HIV infected mothers extremely susceptible to the virus. HIV is a retrovirus meaning the virus does transcription in reverse, transcribing DNA from RNA. During infection, the HIV virus attaches to a compatible receptor on the host cell’s surface. The virus  and injects its RNA and proteins into the host cell. The enzymes reverse transcriptase, integrase and protease are used to transcribe the virus from RNA to DNA and to integrate it into the host cell’s genome. The host cell then becomes a production house for the HIV virus producing the needed enzymes and genetic material to produce many more viruses. These newly formed viruses leave the cells in vesicles via exocytosis damaging the cell. This persistent damage to CD4 lymphocytes and the immune system eventually cases AIDS or acquired immunodeficiency syndrome. This diagnosis is determined through the person’s blood and their CD4 count.

18 months later the treatment was discontinued for unclear reasons.” After, blood samples were taken which revealed that there were undetectable HIV levels in the child’s blood. The child continues to thrive with no detectable levels of HIV in the the body without antiretroviral therapy. What doctors and scientists have taken from this case is that if antiretroviral therapy is started on “infants who are infected with HIV through their mothers via pregnancy or delivery” it may “prevent HIV from establishing a reservoir or a hiding place.” (http://www.biologynews.net/archives/2013/03/04/toddler_functionally_cured_of_hiv_infection_nihsupported_investigators_report.html) 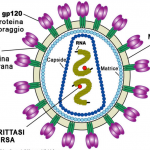