The Australia Wildfires have evoked a sense of urgency concerning the climate change issue. The numbers, specifically the 500 million animals killed in the fires, are astonishing and heartbreaking. The fires have been a result of record high temperatures and low moisture in the air and earth. Climate change caused these fires, and it will continue to make them worse. Many people now are wondering what will come next? What can we do to help Australia? What will we do to prevent more events like this?

Maxine Joselow writes for the Scientific American about the impact that the commercial delivery process has on the environment. The World Economic Forum released a report in early January, 2020 on the rise of e-commerce in major cities around the world. The report showed that the number of delivery vehicles in the top 100 cities is predicted to rise 36% within the next decade, and as a result, carbon dioxide emissions will rise 32% from the delivery traffic alone; that’s 6 million tons.

My brother recently received a camera drone for Christmas, and I was immediately reminded of it while reading this article. My initial reaction was, “just replace the trucks with drones,” since I remember hearing about the new advancements in drone delivery. However, Joselow reminded me that drone technology, though very advanced, is not yet at a level in which it could be used efficiently, safely, and practically. The possibility of drone delivery in the future also depends on the area in which they would be delivering. In urban communities, there is are safety concerns surrounding air traffic and pedestrians. 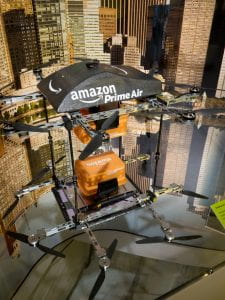 The report from the World Economic Forum recommended several solutions to the carbon-emitting delivery truck problem, including replacing trucks with drones and requiring all delivery trucks to be electric. One author at the World Economic Forum Richa Sahay analyzes supply chain and transport work, and he claims that making the switch from gas to electric delivery vehicles would make the biggest dent in carbon emission levels.