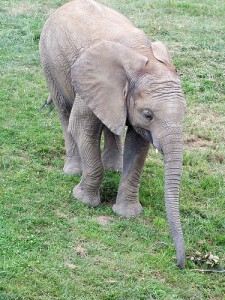 According to a study conducted by zoologists, elephants that are kept in captivity die much earlier than elephants that remain in the wild. Wouldn’t you think that elephants being kept at a zoo would be more likely to live longer? After all, they are getting regular feedings that require little to no effort on their part, and they are purposely kept away from any predators . So what’s the problem?

Ironically, most of these elephants end up dying of obesity (can you imagine how big an obese elephant might be?), because they eat and eat and eat, but don’t get any exercise in their limited spaces at the zoo. In addition to that, the elephants die from the stress of being transported to a zoo, and being separated from their mothers.

In another study, led by the Department for Environment, Food, and Rural affairs, seventy-seven elephants were studied in thirteen UK zoos. The results showed that the elephants spent 83% of their time indoors, 71 of the 77 elephants were overweight, and only 11 could walk normally.

That doesn’t mean that zoos are horrible for all animals, just read this article, but they certainly aren’t helping out the elephants!