A recent article written by Rachel Nuwer discusses the dangers of ocean acidification and how the ocean environment could compromise the fishes’ ability to swim and feed. The existence of one of the world’s most threatening predators is being threatened by ocean warming and acidification. Sharks might lose their place at the top of the marine food chain due to the changing ocean environment. As carbon dioxide levels rise in the ocean, it increases the acidity of the water. As this factor starts to rise, the teeth and scales of sharks may begin to damage, which compromises their ability to swim, hunt, and feed. According to research published in Scientific Reports, acid-base adjustments have proved to be the first piece of evidence of “dentical corrosion” caused by ocean acidification conditions. After investigating the impact of hypercapnia on a specific shark species and analyzing the acid-based regulation, the team concluded that the denticle corrosion could increase denticle turnover and compromise the skin and protection of the shark species. 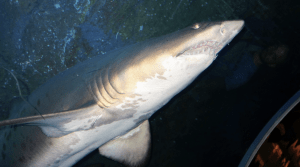 The harsh conditions placed on the sharks could cause several consequences and ultimately could affect the whole ocean community. Biologist Lutz Auerswalk states that sharks could be displaced as apex predators, which could disrupt the whole food chain. In addition, great white sharks are already endangered, and these conditions could wipe them out completely, he states. Ocean research Sarika Singh and Auerswald, while studying over beers, stumbled upon a unique idea. After realizing that the high acidity of beet and many other carbonated beverages causes human teeth to erode, they wondered what effect more acidic ocean water might have on shark teeth.

Most studies on ocean acidification examine species that specifically build shells or other calcium-based structures, including corals and shellfish. Because sharks are large and challenging to work with, only a few studies have been conducted about how acidification might impact these animals. Only one paper has examined the effect of pH on sharks’ skin denticles or scales. The study used small-spotted catsharks and exposed them to different environments and filmed their swimming patterns. After analyzing a pectoral fin skin sample, they did not find a specific impact. However, the results were possible constrained by the low carbon dioxide concentration the researches used, compared with the high levels of acidity already present in many oceans.

To begin exploring this question for themselves, Auerswald and Singh conducted an experiment and focused on puff adder shy sharks, a small species that is easy to handle. They decided to investigate the acidification effects on the bigger scales. They divided the sharks into control and experimental groups and observed the results. After a few months, the electron-microscope analysis revealed that the concentrations of calcium and phosphate in the sharks’ denticles were significantly reduced. They noticed damaged scales on many of the sharks as well. Though the corroded scales might not impact their ability to hunt, for larger species such as the great white shark, scales play an essential role in hydrodynamics. Because denticles are responsible for an increase in swimming speed, damaged denticles could slow sharks down and make it more difficult for them to catch prey. Because many animals have been wiped out, we must strive to protect all the species that are deeply impacted by this condition.