Sorry, What Did You Say? 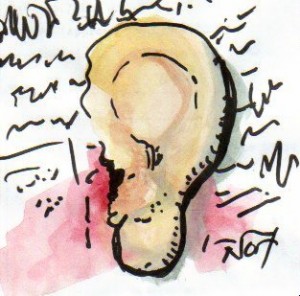 A recent study has shown that the brain has the ability to focus so intensely that it can make a single voice seem like the only sound in a room full of other noises. Nima Mesgarani and Edward Chang of the University of California, San Francisco, studied what happens in the brains of people who are trying to follow one of two talkers. Scientists call this scenario “cocktail party problem.” In the study, electrodes were placed under the skulls of three people for an epilepsy treatment. The electrodes picked up high gamma waves from nerve cells. The pattern and strength of the high gamma waves reflect which sounds the people were paying attention to. The scientists gave the test subjects a signal word and told them to focus on that speaker once that word was spoken. Throughout this experiment, the researchers recorded brain activity and sorted that activity into patterns that reflect voices and words. They found that before the signal word was uttered, the patterns in the brain showed up as a mishmash, but once that word was heard, the subjects’ attention focused on that one voice and their brain activity shifted to a pattern similar to that seen when the listener heard only a solo speaker.

Micheyl said, “scientists already knew that attention influences perception, but the new results demonstrate that this is a literal, direct reflection of auditory attention at the neural level.” These results help explain how people are able to pick out a single speaker from a multitude of incoming sounds. Scientists hope that with these results and a deeper understanding of the brain’s power to focus, it will be possible to better treat people who can’t sort out sound signals effectively, something that can decline with age.

The next time you are in class and feel like you can’t listen to your teacher because the rest of the students in your class are making a lot of noise, try to focus on only your teacher’s voice. Your brain has the power to do this, so if you put your mind to it, you will be able to see that it isn’t so hard to listen to one person amidst a group of jumbled noises!