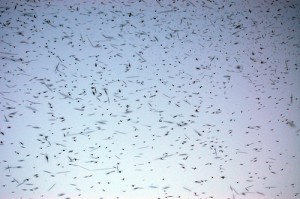 Yes, in fact, we do need mosquitoes. And not only mosquitoes but all the other types of insects as well. A recent discovery by Anurag Agrawal, the leader of the study and a professor of ecology and evolutionary biology at Cornell University, revealed that insects are hugely important because of the roles they play in the evolution of plants. In Agrawal’s study, in which he observed the interactions of plant-eating moths and evening primroses, the primroses treated with insecticide lost through evolution the traits that protect them from insects.

This points to the idea that if plants don’t need to defend themselves against insects, they stop developing the traits required to defend themselves. The real shocker in this discovery, however, was how quickly the primroses adapted to this situation, in just 3-4 generations. Agrawal “was ‘very surprised’ by how quickly this process occurred, and that such surprises, ‘tell us something about the potential speed and complexities of evolution. In addition, experiments like ours that follow evolutionary change in real-time provide definitive evidence of evolution.”
But why are insects important then? Well, it is believed that many plant traits developed solely as a means of defense against insects. Some of these traits are desirable to people, like fruit’s bitter taste. In addition, with farmers trying to breed certain crops to be resistant to pests, this study shows that some genetic trade-offs might make it impossible to get certain traits in pest resistant plants. So bear with those pesky insects, as their relationship with plants is extremely important.

The Brain after Combat