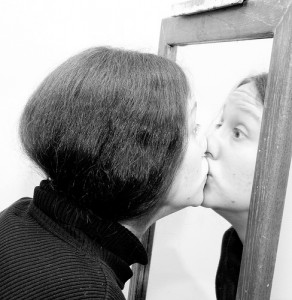 Do you like to look good? Do you like to look so good that you like to look at yourself in the mirror, like a lot? Well you might be a narcissist. According to a recent study done at University of Michigan, all that time you spend dolling yourself up and obsessing over your appearance can put you at higher risk for cardiovascular problems and high blood pressure, well that is if you are a male. This study “examined the role of participant narcissism and sex on basal cortisol concentrations.”

Using saliva samples, researchers measured baseline cortisol hormone levels in student participants. Cortisolsignals the level of activation of the body’s key stress response system, the hypothalamic-pituitary-adrenal (HPA) axis. Participants were asked not to do any activities that would trigger the body’s stress response before testing the hormone levels. Elevated levels of cortisol in a stress-free situation would indicate chronic HPA activation, which has significant health implications such as increased risk of cardiovascular problems and high blood pressure. Next, the students filled out a questionnaire, which tested the five components of the narcissism personality trait. According to researchers, “two of these components are more maladaptive, or unhealthy — exploitativeness and entitlement; and the other three are more adaptive, or healthy — leadership/authority, superiority/arrogance, and self-absorption/self-admiration.”

The Results and Findings:

Researcher, Reinhard  says “narcissists have grandiose self-perceptions, they also have fragile views of themselves, and often resort to defensive strategies like aggression when their sense of superiority is threatened. These kinds of coping strategies are linked with increased cardiovascular reactivity to stress and higher blood pressure, so it makes sense that higher levels of maladaptive narcissism would contribute to highly reactive stress response systems and chronically elevated levels of stress.” However, it what was curious about the scientists’ findings was that higher levels of the stress hormone, cortisol, correlated to males that tested positive for negative aspects of narcissism (such as exploitativeness and entitlement), but the link did not exist in females with negative aspects of narcissism. Even more interesting, neither males nor females with the three positive narcissism traits (leadership/authority, superiority/arrogance, and self-absorption/self-admiration) showed no correlation whatsoever to cortisol levels. These results are particularly interesting because it suggests that narcissism influences how people respond to stressful events as well as their everyday routines. For example, the HPA axis may be chronically activated in males with unhealthy narcissism even if there is no actual stressor. This constant stimulation of the hypothalamic-pituitary-adrenal (HPA) axis, or stress response system, could lead to health risks in the cardiovascular system.

Do You Really Want that Third Piece of Bacon?