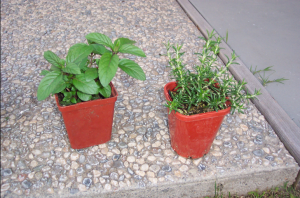 An exciting new study at the St. Louis University Medical School, has gave way to a new theory regarding the prevention of Alzheimer’s Disease. The geriatric researcher, Dr. Susan Farr Ph.D, disclosed at Neuroscience 2013, that extracts of spearmint and rosemary can “reduce deficits caused by mild cognitive impairment, which can be a precursor to Alzheimer’s disease,”.

The research was conducted on an animal model, so there is no conclusive human evidence yet. But Dr. Farr’s results seem promising in that her tests using an “antioxidant-based ingredient” made from spearmint extract and two different concentrations of a similar antioxidant made from rosemary extract on mice that have age-related cognitive decline.

Farr found that the higher dose rosemary extract compound had the most impact in increasing memory and learning in three tested behaviors. The lower concentration rosemary extract improved memory in two of the behavioral tests, as did the compound made from spearmint extract.

Her research also found that the introduction of these extracts to the subjects’ systems decreased oxidative stress, a “hallmark of age-related decline” in the cerebrum, the learning and memory center of the brain.

As Dr. Farr continues her promising research, are you going to find yourself chewing more spearmint gum?