I don’t know about you, but I’ve always wondered what I would do if I was ever being chased by a crocodile. At a young age I learned that you should always run zig zag, because that slows the beast down. Good advice right? Well, what if the crocodile still catches up to you? Don’t say your prayers yet. If your crocodile is relatively small, but just looks like it would have a nasty bite because of the way it’s teeth look, you may be in the clear! 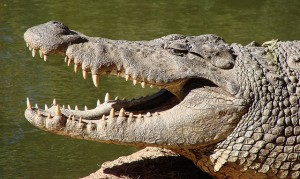 A recent article explains that the the size, shape, and look of jaws is not an accurate barometer of how hard that particular crocodile will bite. For years, scientists believed that evolution created crocodiles with jaws that are broader so that their bite is also very strong. Reversely, crocodiles with a jaw that looks somewhat delicate would have a low bite force. Now scientists know that teeth and jaws evolve completely separately to that of bite force. In fact, the only variable that affects the bite force a crocodile will have is the size of the animal.

I encourage you to think about an escape plan if you are ever faced with a crocodile. Whether or not their bite force is considered strong or not, most likely it could still severely injure you. I suggest running away, even if the crocodile looks like it’s bite force is less than 1000 pounds. Trust me. What do you think about this recent finding? Common sense? Or did you assume that jaw shape played a part in how hard a crocodile could bite, as well?

All Procrastinators Must Read!