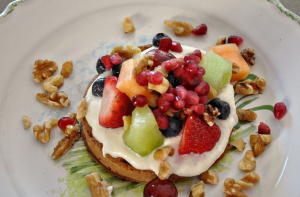 I was always told that Breakfast was the most important meal of the day, and I thought that was because breakfast gave me the brain food I needed to be able to function in school. While this is a big reason to eat breakfast, The New York Times has just posted an article describing another reason to eat breakfast. Lowering your risk for Type 2 Diabetes !

Diabetes is a disorder concerning metabolism. More specifically, Diabetes refers to a “malfunction” in the way that our cells react to insulin produced by the pancreas. Type 2 Diabetes is the most common form of diabetes, and occurs when the pancreas is either not producing enough insulin, or our cells aren’t reacting correctly to the insulin our pancreas is producing.

The American Journal of Clinical Nutrition conducted a study in which 29,000 men were followed for 16 years, with their eating habits being closely watched. Over the course of this study, about 2,000 of these men developed type 2 diabetes. The researchers concluded that those who skipped breakfast had a 21% higher risk of developing type 2 diabetes than the others.

There are two theories as to why this may be. First, some scientists believe that a morning meal helps stabilize blood sugar levels throughout the day. Another theory claims that by skipping breakfast, people partake in increased snacking throughout the day, and their intake of sugary snack food dramatically increases.

So think about it! How many of you have skipped breakfast, only to run to the college office scourging for any food you can find? Rather than eat tons of junk throughout the day to compensate for all the real meals you’ve been skipping, try starting your day just a little earlier to fit in a healthy breakfast. You’ll notice the benefits immediately!

For More information on Healthy Breakfasts, Check out this link: http://www.breakfastpanel.org/what-makes-a-good-breakfast

How Old Are You, Polar Bear?

Sorry, What Did You Say?