Mars used to have flowing water, a thick atmosphere, and a magnetic field. But now it is only covered with dusty riverbeds and its air is practically a vacuum. Now how did that happen?! In order to uncover what happened to the planet’s lost features, a spacecraft MAVEN was sent out to search for clues. The probe was able to fight through the red planet’s turbulent lower atmosphere and witness a shimmering aurora and solar storm. The data the probe brings back gives scientists a glimpse into Mars’ past and scientists have now presented the mission’s first findings. 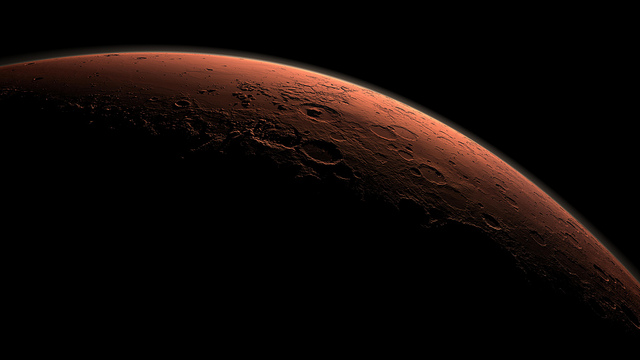 Thus far, the most impressive findings came from watching the effects of essentially a monster solar storm on the planet’s atmosphere. This was highly significant because, as Brain said, “solar storms are really windows to the past. We got to see what happens when a lot of energy hit all at once.” Solar storms can potentially strip away a ton of atmosphere and they are what most likely happened all the time billions of years ago.

One reason the red planet’s atmosphere is so susceptible to solar activity is due to its lack of a strong magnetosphere. When the sun gets riled up and fires dangerous and energized “blobs” at Earth, our planet’s electromagnetic barrier shields the attack and redirects it towards the poles. While traveling along the magnetic lines towards the poles, the solar particles pick up charge, which they release when encountering particles in Earth’s atmosphere, thus emitting light—an aurora.

Scientists were surprised when MAVEN witnessed an aurora on Mars since the planet does not have a magnetosphere. The aurora lasted five Martian days and potentially even enveloped the whole planet. This is a new kind of aurora for scientists as it doesn’t require a magnetic field. Unfortunately the team doesn’t have any noteworthy pictures of the aurora since the probe only caught it on its ultraviolet imager.

There were other impressive findings as well. “Mars has pretty significant topography,” says Stephen Bougher, an atmospheric scientist at the University of Michigan and MAVEN co-investigator. Surface winds bend over features like Olympus Mons, and those disruptions propagate upward into the atmosphere. “Just like a wave coming onshore would crest and break, atmospheric waves crest and break,” says Bougher. But those winds don’t even explain the presence of heavy dust particles high up in the Martian atmosphere. MAVEN collected dirt from more than 600 miles up that defied the dynamics of Martian gravity. “The puzzle is how did that dust get up so high,” says Brain.

These findings aren’t just flashy—they’re scientifically major. They will help scientists understand more about how and why Earth’s atmosphere is so stable, and give interplanetary scientists a better idea of what to expect in future Martian expeditions. “You can figure out what dosage of radiation astronauts would be getting as they set up shop on the surface,” says Bougher. “You don’t want to send astronauts to certain death without exploring the risks.”

For more information, check out this article:

And check out this video: