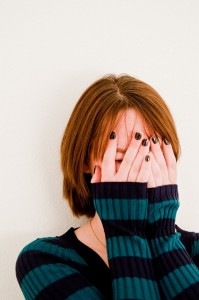 Are you a clumsy person? Have you ever talked behind someone’s back and then realized they heard the entire conversation? Maybe you mistook a very large woman to be pregnant? Don’t worry, your embarrassment in these situations is actually beneficial to your social life!

A recent study has uncovered findings that seem to show that someone who gets embarrassed often is more trustworthy in his or her friends‘ eyes. UC Berkeley researchers interviewed, tested, and video taped 60 college students to find the correlation between embarrassment and trust.

In three of these experiments, overwhelming data came forward suggesting embarrassment leads to being trusted by your peers. The first experiment simply had the students on tape, explaining an embarrassing moment. The researchers studied how embarrassed the students became by telling the story, measuring the least amount of embarrassment as ” a downward gaze to one side while partially covering the face and either smirking or grimacing.”

The next experiment gave the students 10 raffle tickets and asked them to keep a portion for themselves, and give away the rest to a partner. The students who gave away the most tickets were those who got the most embarressed in the first experiment.

I decided to test this article’s data. While writing this article, in a room full of my classmates, I positioned my chair in a precarious position and fell to the ground. Normally someone in my situation may try to hide their embarrassment and brush it off when everyone laughs. However I allowed my peer, and fellow AP Bio classmate, sweetasglucose, to help me up, and I showed my embarrassment. Once it was determined that I was alright, sweetasglucose said: “You fell to the ground in a rush. Then I noticed your blush. And I was like she will keep the secret about my crush!”

There you have it. Tested in our very own community. What do you guys think about embarrasment and trust? Do you trust your friends more if they’re clumsy? What other aspects about a person’s personality do you think makes them more trustworthy?

Always Sick? It may not be your fault