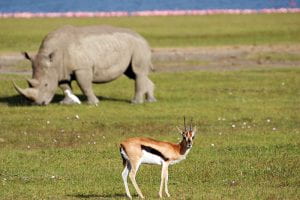 A rhino and gazelle graze in Kenya’s national park.

Scientists have been studying the microbiome of animals and humans for years. DNA analysis has proved to be a method of research that allows scientists to understand the microbiome better. Researchers at Brown University have recently added onto this knowledge by conducting a study focusing on the microbiomes, diets, and environments of animals.

In a recent study conducted by Brown University, scientists analyzed animals’ feces collected by researchers in Kenya in order to further explore the relationship between the microbiome, environment, and diet. The had researchers from the Mpala Research Centre in Kenya collect approximately 1,000 samples of feces from 33 different herbivore species such as elephants, giraffes, and antelopes. The samples were then analyzed, specifically the DNA in the samples were analyzed, and the researchers came to three conclusions.

Why Is This Important?

The findings of this study have opened up a door to more question to be answered and research to be done. Future research will focus on the health of wild animals whose microbiomes change significantly based on their seasonal sensitivity. This is only the beginning of a series of studies that could continue on to figuring out how we can manage the human microbiome in order to improve overall human health using DNA and genetic findings. I think it is very interesting how some samples of animal feces in Kenya could be the start of a series of studies used to improve the health of humans. What do you think?