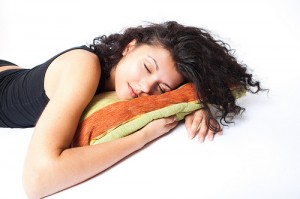 Insomnia affects nearly ten percent of Americans. A survey of more than seven thousand people found that 23% exhibited signs of insomnia and estimated that lack of sleep costs the country 63 billion dollars annually in lost productivity. Some preliminary studies have suggested that applying a gentle current to the brain might ameliorate this issue, but the idea has been understandably unpopular among potential patients.

In an effort to find another method to ameliorate insomnia, researchers conducted a study of of “pink noise,” a type of noise with a power spectrum that is inversely proportional to its frequency. It is called pink noise because visible light within this spectrum appears pink in color. In executing their study, the scientists had eleven volunteers spend two nights in their sleep lab, one while pink noise matched to their brain waves was played and one in silence. Before they went to sleep, they were showed pairs of words and asked to memorize them. The volunteers were also hooked up to EEGs so that their brains could be monitored while they slept.

During the night with pink noise playing, the researchers recorded prolonged deep sleep and increased size of the  wavelengths in the volunteers’ brains. These slow brain waves are connected with memory retention and “information processing,” which was reflected in the researchers results. The volunteer sleepers performed better in the memory exercise when the pink noise had played as they slept.

The scientists involved in this study emphasize that the pink noise was matched to the brain waves of the patients, and that further research and development could lead to tools to improve sleep and even enhance brain activity while awake. Entitled Auditory Closed-Loop Stimulation of the Sleep Slow Oscillation Enhances Memory, the study was published in Neuron.