First the world switched from cd’s to iPods, and then books to e-books. This time we’re ditching the cigarettes and buying E-Cigarettes. 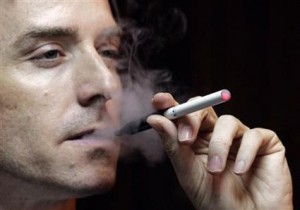 A new invention that is gaining popularity throughout the world is E-Cigarettes. E-Cigarettes is a fake cigarette that when you treat it like a normal cigarette and take a breath from it, releases nicotine vapors into your body. It is designed to rival the experience of an actual cigarette, while still promoting a healthier option. But is it actually healthy? In this article, scientists and other advocates of cigarette abstinence say no.

Traditionally, the usual ways of quitting smoking can vary from cold turkey to using FDA approved products that also include Nicotine gum. However, these E-Cigarettes have been shown to dramatically aid the quiting process, as seen in a study done by the University of Catania. “After six months, more than half the subjects in Dr. Polosa’s experiment had cut their regular cigarette consumption by at least 50 percent. Nearly a quarter had stopped altogether.”

Not everyone is so thrilled by E-Cigarette success. The FDA, American Cancer Society, American Heart Association, Action on Smoking and Health, and the Center for Tobacco-Free Kids have banded together against E-Cigarettes. “They argue that the devices, like smokeless tobacco, reduce the incentive for people to quit nicotine and could also be a “gateway” for young people and nonsmokers to become nicotine addicts. And they cite an F.D.A. warning that several chemicals in the vapor of e-cigarettes may be “harmful” and “toxic.””

In many ways E-Cigarette science must still be studied, along with the potential harms it could have on someone’s body. However the incentives to encourage the use of E-Cigarettes instead of normal Cigarettes are clear: “On a scale of harm from 1 to 100, where nicotine gums and lozenges are 1 and cigarettes are 100, he estimated that e-cigarettes are no higher than 2.”

So what do you think? Should major anti-smoking agencies oppose this potentially safer cigarette substitute? Do you think that smoking is okay? How do you think people should quit if they choose to do so?