Fires have been raging across Australia for almost four months now. Concentrated in the east, the fires have killed 24 people so far and over a billion mammals. Record high temperatures and a long drought are the main culprits of the devastating fires. Scientists claim that the cause of these abnormal conditions in Australia is climate change and predict that these fires will be three times as likely to occur by the end of the century.

An oscillating ocean-atmosphere weather pattern that starts in the Indian ocean is behind the particularly hot and dry seasons in Australia. The weather pattern has three phases: Positive, Neutral, and Negative. When the Indian Ocean dipole is in a strong positive phase it leads to Australia’s worst fire seasons. Wenju Cai of CSIRO is a climate scientist studying the fires.

“Global warming is likely to make such extreme positive phases much more common,” He said.

In a 2014 study, he simulated future sea-surface temperature changes in the Indian Ocean in a world where greenhouse gas emissions continue to rise. They found that the frequency of strong positive-phase events could increase from about once every 17 years to about once every six years, tripling the frequency of fires in Australia. When asked if there’s a link between the fires and climate change, Cai responded,

“The big message of our 2014 paper is that, under global warming, that kind of huge Indian Ocean dipole will increase threefold by 2100.” 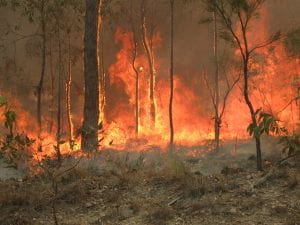 Proven in the study by Wenju Cai, if greenhouse emissions continue on their path then fires in Australia will be three times as frequent by the end of the century. What we can do to give the planet a better future is reduce these emissions.

For more on the devastating fires in Australia, click here or here