A lot of people say they aren’t scared of anything, but the reality is every body is scared of something. Everybody, except a woman known as SM.

SM had a rare illness that caused damage to the part of her brain associated with fear. The amygdala “is involved in many of our emotions and motivations, particularly those that are related to survival”.  In the same way that pain is a warning sign in attempt to protect you from danger, fear is a function of protection. Without fear you would constantly place yourself in dangerous situations with out responding to an impulse of survival. 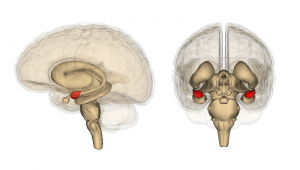 The Amygdala- the area of the brain responsible for fear

The damage to SM’s amygdala caused her to lose the ability to feel fear. Scientists tested her on several simulated and real life situations such as being held up at gunpoint, watching scary movies, watching domestic violence. SM felt no fear what so ever in any of these situations. Scientists naturally would predict that with the loss of a functioning amygdala, SM would never feel fear again.

Yet, one day SM had a panic attack. The panic attack was brought on in an experiment where SM inhaled a small amount of carbon dioxide that created a short feeling of suffocation.

The fact that SM felt fear from a panic attack without an amygdala “illuminates some of the brain’s most fundamental processes and may have practical value in the study of panic attacks.” Additionally, it suggests that there may be an alternative center for fear responding to internal threats- such as suffocation or a heart attack.

This study is particularly fascinating because it shows just how little we know about ourselves and the world around us. It illuminates the flaws in our apparent definitive knowledge and encourages further research and speculation about what we know concerning the brain.