Eek! I hate that sound!

Do you get goose bumps when you hear nails dragged across a chalkboard? Do you have to cover your ears and wonder why this sounds makes you so uncomfortable? If you have, fear no more!

A recent study was conducted by scientists to discover why certain noises make people cringe. The study consisted of 104 people who listened to six different chalkboard squeaks. After listening to the squeaks, the people had to rate their discomfort level. The researchers then measured changes in the listeners’ vital signs and skin conductivity, indicators of stress, while replaying the two most annoying squeaks. The sounds contained frequencies that ranged up to 12,000 hertz (Hz) and beyond. The scientists thought that maybe filtering out the highest frequencies would make the fingernail-scraping sound less chilling. Yet, they found that cutting out the lowest or highest frequencies did not change the listeners’ level of discomfort. They did, however, find that removing all tones between 2,000 and 4,000 Hz made the experience a little less painful. The researchers are not completely positive why this sound range makes the experience worse, but they believe that maybe the ear canal naturally resonates with those frequencies more than others. The sensitivity to this sound range can very well be why people with noisy jobs tend to lose hearing in this frequency range first. 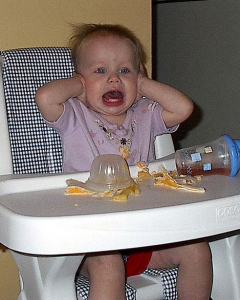 Scientists concluded from this study that sound waves alone are not the only factor that makes for this distressing experience. Knowing that a screech comes from a chalkboard, instead of something pleasant, adds to the listener’s irritation. The fact that the brain associates hearing squeaks on a chalkboard with an unfavorable experience triggers the listener to react negatively when such sounds are heard. Scientist Randolph Blake at Vanderbilt University believes that vision is another factor that adds to the painfulness of the experience. He said, “I’m convinced that watching somebody scrape their nails on a chalkboard will make the experience even more unpleasant.” Thus, our reactions to certain sounds are part psychological and part physical.

These findings help illuminate why people react badly when they hear unpleasant sounds. Although the study has not found a solution to making these experiences somewhat more enjoyable, these findings have helped scientists determine which sound frequencies people are more sensitive to, which could help researchers learn more about our the complexity of our hearing and its sensitivity. What other types of sounds give you the chills? Do you think that researchers and scientists can find a way to make unpleasant noises more enjoyable? What do you think their ideas and methods would be? As for now, try to stay away from fingernails dragging across a chalkboard, because although you may know why your body does not like hearing it, you sure don’t want to have to go through the pain!