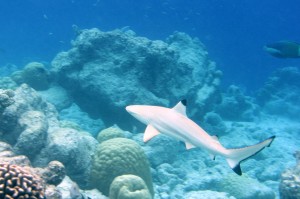 Sharks are just adding to their long list of impressive abilities. They are amazingly immune and can help cure cancer, they can be a cyclopes, and now they are proving evolution.

The world’s first hybrid shark has been discovered in Austrian waters. The shark is a cross of an Australian Blacktip shark and a Common Blacktip shark. Common Blacktip sharks are found in the Atlantic Ocean. This discovery displays the animals fight for existence; overfishing and pollution have reduced shark populations in general all over the globe. The adaptation of this new hybrid allows the animal to survive in cooler water temperatures, previously intolerant for species. Scientist believe the sharks are “adapting to cope” with global warming and changing water temperatures.  This adaptation and creation of a hybrid creature is evolution. This discovery proves that evolution is no longer a theory but is happening right now.

The new hybrid species has many generations under it’s belt, displaying its ability to reproduce. The species will have to be further studied before comparing their life to that of their parents. This discovery also opens the door to the discovery of other species crossbreeding or evolving as well.

Secrets (almost) Revealed about the Evolution of Plants