The Rise of NFL Brain Injuries and Possible Solutions 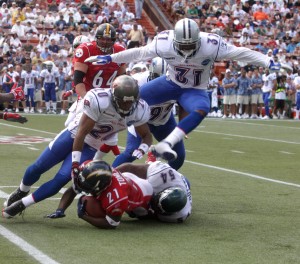 Brain-injury treatment program that was created for military veterans hurt on the battlefield has now been updated to include professional athletes. Eisenhower Center’s representatives announced that it will be the main facility used by the NFL Players Association to treat brain and neurological issues. This will be facilitated through the After the Impact program.

The NFL expects 28% of retired players to suffer Alzheimer’s or moderate dementia; this has caused former players to sue. About a third of all retired NFL players will suffer long-term cognitive problems and the After the Impact program has helped some reach the path to recovery.

NFL provoked a judge to approve a $1 billion settlement of concussion lawsuits ignoring concerns raised by former players. The 65-year fund will resolve thousands of lawsuits on the NFL, accusing them of hiding their knowledge of concussions and brain injuries in an attempt to keep players.

I picked this topic because I watch football every weekend and have wondered about the impact of the hitting on the players. It is nice to see that there have been efforts made to fix this.