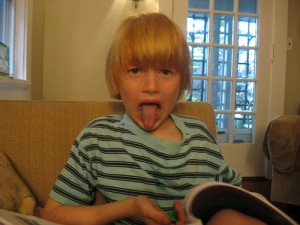 Have you ever watched something so gross you just have to make a face?
Scientists are studying disgust and how it may have helped us evolve into a clean, healthy, and surviving race.

Disgust isn’t just a learned behavior, as I assumed. It begins very early- as you can see on the faces of  these babies who are eating lemons for the first time. And the grammar school taunting of “you have cooties” is a hurtful taunt because the labeling evokes a small sense of disgust in the other children toward the child being teased. It is the disgust, and to a very small degree, the feeling of being shunned that creates the kindergarten tears.

Though teasing puts disgust in a negative light, it has done wonders for the human race.  According to Dr. Valerie Curtis from the London School of Hygiene and Tropical Medicine:

In other words, disgust partially defines who we spend time with, how we maintain ourselves and who we do not spend time with. Because we have a sense of disgust, we humans have kept ourselves clean enough to thrive in this bacteria filled world. Pregnant women are especially sensitive to disgust, especially in the first trimester, when fetal development is most fragile. It is also the time when the mothers immune system is the least strong. For these reasons, the mother’s emotional way of warding off disease — disgust —  is strengthened.

The emotion of disgust stems manly from the insula and amygdala. The insula, a “prune sized,” centrally located “slab of brain tissue,” causes many of the social emotions, including guilt, pride, and humiliation. The amygdala, similarly, is connected to human emotional responses, especially fear and pleasure.

Since disgust has show to be such a key factory in our motivation to stay clean, and healthy, Dr. Valerie Curtis (quoted above) along with other pubic health activists have been “trying to gross people out” in the name of hygiene. Through cartoons and pubic advertisements, the activists are aiming to invoke a sense of disgust in the current, unclean practices. The programs currently exist in Africa, India and England. Who knew disgust could be so helpful?

Wait, Babies can be Born Without Eyes?