Have you ever wondered why we yawn even if you’re not tired, or if someone else yawns? The University of Nottingham published an article called “A Neural Basis for Contagious Yawning” in Current Biology. This study was led by Stephen Jackson, a professor of Cognitive Neuroscience at the University.  The research group worked to find reasons as of why yawning is contagious.

This study did not find the neural basis for yawning, but used tests to try and figure out what the neural basis is. The team used transcranial magnetic stimulation (TMS) on 36 adults to test for the neutral basis. TMS is a procedure that uses magnetic fields to activate nerves in the brain. The stimulation increases the need to yawn. The adults were shown videos of people yawning and were told to yawn when needed or to resist the yawn. The number and the intensity of the yawns was recorded. Georgina Jackson, a professor of cognitive neuropsychology in the Institute of Mental Health, quoted that “this research has shown that the ‘urge’ is increased by trying to stop yourself. Using electrical stimulation we were able to increase excitability and in doing so increase the propensity for contagious yawning.” This method can me used to figure out when contagious yawning will occur.

Yawning is a natural human function that happens daily. It is interesting to learn about how it works and how one’s yawn can affect other people. Although there is not yet a clear answer of how this works, it is fascinating to learn about different theories from different researchers. For more information on contagious yawning click here and here. Based on reading this research, what do you think the best explanation to contagious yawning is? 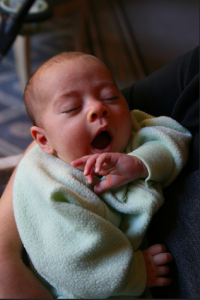