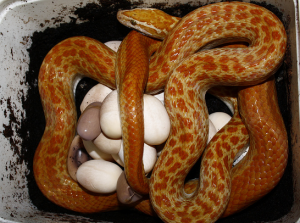 Virgin pregnancy has been reported in various species and under difference circumstances. Some females retain sperm from previous accounts until their eggs can be fertilized, while others use their eggs to act as sperm and fertilize the eggs with just their DNA. A Pit Viper snake has recently been discovered to have been “hoarding”  sperm for 5 years; although there have been previous accounts of sperm conservation, this is the longest recorded case. All of these recorded animals have been kept separate from male contact for many years.

Asexual reproduction is very common among invertebrates, but previously thought impossible about vertebrates. These vertebrate give birth by parthenogenesis, which is reproduction without an egg being fertilized by sperm. This has been found in sharks, birds, and now reptiles. Offspring from such cases have seemed to be normally.

A theory exists that snakes, for example, may have evolved to being able to reproduce by parthenogenesis because of lack of males to mate with; this adaptation will help pit vipers from becoming extinct down the road.

There have been various cases of parthenogenesis; females reproducing offspring without any contact with males, females storing sperm until their eggs are available, and females holding sperm from immaturity until they are mature.

Scientists are interested in using this discovery to improve sperm storage for humans and livestock alike. Scientist reasoned that “virgin birth” is not possible in humans.