Beauty is Pain: and naked mole rats have neither

A new study published October 11 in Cell Reports offers some reasons behind the rodent’s abilities. Minor evolutionary changes to the amino acids in their pain receptors make the naked mole rat highly insensitive to pain after birth.”We think evolution has selected for this tweak just subtly enough so that the pain signaling becomes non-functional, but not strong enough that it becomes a danger for the animal,” says lead author Gary R. Lewin, a professor at the Max-Delbruck Center for Molecular Medicine in Berlin, Germany.

Much of this is due to the environment and behaviors present in the mole rats life. Naked mole rats often live in large colonies, with up to 300 members. The constant digging of tunnels and over crowding should leave the mole rat in great discomfort, and highly prone to a condition called thermal hyperalgesia. Humans have the same condition, which we generally call heat sensitivity. Imagine entering a hot bathtub with a bad sun burn. When this happens, it’s because sensory receptors on your skin have been chemically “sensitized” by inflammation or high temperatures. Once those receptors are sensitized, even the smallest amount of heat will cause sensory nerves to send signals to the  brain that register this as painful. Naked mole rats lack this reaction.

Through a series of calculated and carefully designed experiments, Lewid and his team were able to pin point what differentiates naked mole rats from all other rodents- a change in their TrkA receptor. They discovered a switch of just one to three amino acid changes on one section of the naked mole rat TrkA receptor that make it less sensitive.

“Even though the naked mole rat’s version of the TrkA receptor is almost identical to that of a mouse or a rat, it has a very significant effect on the animal’s ability to feel pain,” says Lewin. The naked mole rat is built for efficiency. It’s an animal built to survive the toughest of conditions. Evolution has shut down everything that is not necessary in the naked mole rat, including nerve receptors.

In my opinion, the naked mole rat is pretty cool. It has learned to evolve in order to survive. Maybe this trait is why the this species of rodent in particular outlives all of its fellow rodents by over 25 years. My one question would be, “Is the ability to not feel pain always an advantage? Or can this sometimes lead an animal into dangerous situations?” Whatever the answer, the naked mole rat is an evolutionary success. 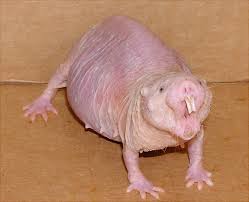