This article highlights the discovery of a chemical that could potentially be responsible for wide-spread vaping-related lung injuries and deaths in the United States. Centers for Disease Control and Prevention researches acquired bronchoalveolar lavage fluid (fluid from the lining of the lungs) from health care workers who were taking care of patients with vaping associated lung injuries, or EVALI. The result of this was samples from 29 patients from 10 states.

The researches announced on November 8th in a news briefing and a report that they found vitamin E acetate in the lung fluid samples of all the patients suffering from vaping illnesses. Vitamin E acetate has been previously found by health officials in various vaping products used by patients. Interestingly enough, vitamin E acetate is largely used as a dietary supplement along with being an ingredient in various skin care products. Even though it is safe when used as such, research shows how this chemical can be harmful when inhaled. 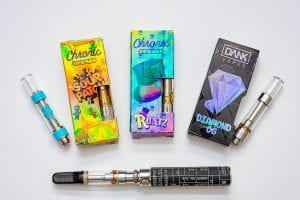 New York state health officials announced in September that they had discovered high levels of vitamin E acetate in samples taken from the vaping products shown above.

Vitamin E acetate acts as a diluting and thickening ingredient in vaping products that contain tetrahydrocannabinol (THC), which is a psychoactive ingredient in marijuana. Most EVALI patients have reported using THC-containing vaping products along with products containing nicotine. The researchers also tested for other chemical additives that act as diluting ingredients (plants and mineral oils); however, none were detected. 2,051 people across all states besides Alaska have been reported with EVALI and 39 people have died.

While this finding is a great step forward in finding the cause of these vaping-related injuries and deaths, Anne Schuchat, a principal deputy director of the U.S. Centers for Disease Control and Prevention in Atlanta, believes that “we still have more to learn” and “that more than one ingredient could be responsible.” Similarly, this new finding leaves me very hopeful in exposing the source of vaping-related injuries and deaths but I definitely believe that there is still much more research that needs to be done.

Is there scientific reasoning for women to be stay at home moms?