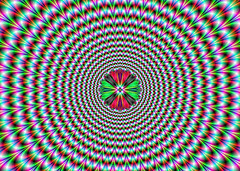 How do illusions deceive people into seeing false perceptions of what is actually in front of them? Illusions are caused from a misunderstanding between eyes and the brain. All illusions start with the eyes. The light that bounces off an object enters the cornea of the eye. The cornea refracts the light through the pupil. The light rays then go through the lens towards the retina where the nerve cells are present. The cells, commonly called rods or cones, which are the two types of cells that  send the light through the optic nerve for the brain to interpret. Illusions are set up in a particular way with patterns, images or colors that trick the brain.

Illusions sometimes occur due to familiarity of the situation we are falsely perceiving. The whole process of interpreting information takes fractions of a second, so often times the brain quickly notices a familiar situation and is hard wired into coming to a conclusion. The link below displays a picture providing an example of this phenomena. The second picture consists of what seems to be simply a nature photo, but with a closer look actually shows the outline of a women’s face. Naturally the brain quickly perceives just trees becasue it is the “normal” understanding of the photo.

Another type of illusion, called a physiological illusion, occurs from a certain type of light, color, and position. This type of illusion occurs when the stimuli that are sent to the brain are so intensive or repetitive that it causes some sort of jam that creates a misperception. The picture below seems to be moving side to side. The reason this illusion works is becasue the repetition that the eyes can’t fully digest and an over stimulation occurs.

Sometimes simply context can confuse the mind. The illusion below shows two groups of circles. The middle ones on both sides are surprisingly the same size. It is extremely shocking because the one on the left looks much bigger than the one on the right. This happens becasue the brain groups each part of the image separately and compares those circles. The circle on the left is big compared to the others while the one on the right is smaller than the others. This shows how the brain analyses some situations. The brain simply compares each circle to the other and gives it a general big or small association. 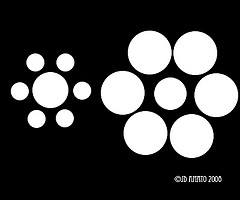 Essentially illusions come from the false information and trickery our eyes send to the brain. Our eyes and brain work to process information in fractions of a second. Because of this optimization and simplicity is key. Rather than fully grasping all of the information many comparisons and quick conclusions can be made. The brain is forced to take shortcuts with comparisons such as light and dark, big and small, and shape to quickly adapt and react to what the eyes see.