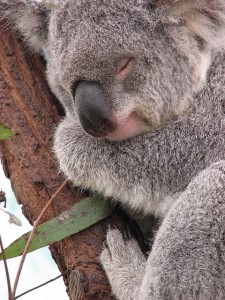 For generations the koala bear has been a cuddly mascot from down under, bringing in approximately $1 billion in tourism to the Australian economy a  year, but the species is being plagued by a heinous disease: Chlamydia. Yes, that’s right, Chlamydia. Studies show that between 50 to 80% of koala bears are infected with the bacterial infection which causes conjunctivitis, incontinence, prostatitis, infertility, and kidney damage.

According to recent reports, the sexually transmitted disease has caused serious population damage over the last decade. In 2003, studies showed that the koala population was at approximately 100,000, but the 2009 survey reported a drop to as few as 43,000 koalas in the wild. Experts fear that if these numbers continue to fall at the current rate, the koala will reach extinction within a mere 30 years.

And, with the disease spreading faster than ever, there is little conservationists can do to treat the infected population due to the absence of a vaccine. Unfortunately, however, a small percent of koalas is being treated with long-term antibiotics and anti-inflammatories in order to provide temporary relief to the suffering animals. But as the disease continues to run rampant, there seems to be little hope for the koala bear’s survival, which raises the question: why now?

Some experts believe for the combination of climate change and human development of koala bear natural habitat have increased the disease’s ability to spread among individuals. Climate change has caused heat waves and drought to sweep across much of the eucalyptus forests where koalas live and has resulted in the overall weakening of many koala populations unable to cope with such temperatures. In recent years, the species has also lost inordinate amounts of their habitat to human development which pushes them into a smaller and smaller region. This encroachment forces koalas into closer quarters, which, along with their already weakened state caused by climate change, results in the extremely rapid spread of Chlamydia among individuals.

But if the extinction is so pressing and the situation is so bad, why hasn’t the Australian government stepped in? Well until recently Australia officials have been avoiding taking action, but just this summer the Australian senate has finally agreed to address the problem and evaluate whether or not the koala bear should be an endangered animal under the protection of national law. Unfortunately, the process is taking longer than anticipated. A decision was supposed to be in by August, but here we are in mid-October and the koala bears are still unprotected by the government. How many more koala’s will have to die before the Australian senate takes action? And if they do take action, will it be too late to save the iconic marsupial from down under?

For more information on the current situation go to: