Everybody has heard of sleep walking, yet, being that it is one of the most common sleep ‘disorders’ out there, it has never been viewed as a problem or even something that is medically related. Because of this, sleeping walking has been kept out of medical research for the last several decades. A recent poll shows that 1 in 3  Americans  have ‘sleep walked,’ but none of these people seek medical attention. While there is nothing harmful about unconsciously standing up in the middle of the night here and there, a new study shows otherwise. 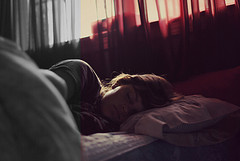 REM Sleep Behavior Disorder, or simply a serious case of sleep walking, is something that effects millions of Americans across the country. This form of parasomnia is much more serious than normal ‘sleep walking’ and can be dangerous. Usually when someone sleep walks the brain sends out signals to move but the neurons that enable movement are inactive; so while it may feel like one is moving during a dream, you are still stationary. For the percentage of people that have REM Sleep Behavior Disorder, this ‘blockage’ that prevents actual movement vanishes. While in the Rapid Eye Movement stage of sleep, the neurons can make the required connections, and movement is possible. Not just the simple movement involved in everyday ‘sleep walking,’ but full, brain controlled motor skills. In other words, what ever someone with the REM disorder is doing in their dreams can carry over into actual actions that cannot be controlled.

Picture this: a man is having a normal dream, well then again not many dreams are normal. In dreams we have no control of the “rational” side of our brain, only the emotional. To make matters worse, while in this state one may have full control of the senses, such as sight and touch, but all of the decisions would be being made subconsciously while the we are the deepest kind of sleep there is. While dreaming of doing something stupid may seem like something harmless, it can be everything but if it happened in reality. For instance, a man is dreaming about a missile chasing him. Seems crazy right? Not for a dream. Things that seem like nonsense while awake make perfect sense to the dreaming mind, even a flying missile headed strait for us. In a movie based on real life events based on the REM disorder a man stood up mid REM sleep and actually jumped through a window in his home to avoid this missile that was nothing but a figment of his imagination. Although this was obviously dramatized, nothing about it is impossible or even unlikely. Several doctors have started diagnosing people with the disorder, dubbing it as something that can be very dangerous in certain situations.

Wait, you don’t hear that ringing, too?