The obvious precursor to cocaine addiction is cocaine use. However, some people are able to use cocaine on and off with out becoming addicted while others become afflicted by addiction very quickly. There has always been the theory that your personality can make you more prone to addictions and other “weak” decisions but recent studies go a step beyond that and link addiction to the structure of an individual’s brain. 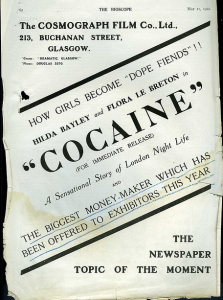 The scientists believe that the size difference was preexistent and  not a result of drug use because both groups were cocaine users. The main difference was that the mere users “could take it or leave it” due to their more powerful self control.

Another example of increased susceptibility to addiction is the genetic or hereditary quality of alcoholism. “Though the exact mechanisms haven’t been identified, experts in alcoholism widely agree that some people are genetically vulnerable to developing the disorder.” Also, experts suggest that many people addicted opiates may have “deficiencies in their brain reward systems.”

Further studies exploring the links to the brain and addictions would be instrumental in curing the countless addictions that interfere with people’s quality of life.

Link to the photo used:http://www.flickr.com/photos/nationalarchives/4327205241/