Sleeping with your eyes open while driving?

Researchers at the Liberty Mutual Research Institute in Massachusetts estimate that about 250,000 Americans drive while sleep deprived everyday, and according to the National Highway Safety Administration, about 6,000 people are killed each year by an exhausted driver. That’s only second to drunk driving fatalities!

Experts say that you need about 7-8 hours of sleep a night. If you aren’t getting enough sleep, your judgement and memory can be impaired, and you may even find yourself snoozing throughout the day uncontrollably! What’s worse than that is an insidious phenomenon called microsleep. Microsleeping is a brief transition between sleeping and wakefulness. It can last from a few seconds up to 30 seconds and you may not even realize it.

An ABC reporter did an experiment with the institute just outside of Boston. He mimicked sleep deprivation by staying awake for 32 hours straight. Then he and some of the research scientists got into a van and prepared for him to drive on a closed track for about 2 hours. The reporter explained how he thought he would feel fine as he had done many all-nighters before. However, he wasn’t even able to stay fully awake after 10 minutes of driving. His eyes stayed open, but the monitors 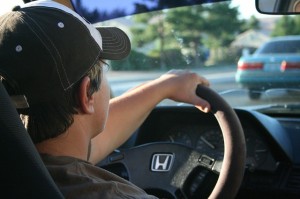 Photo By: Jace
Found through “free to use and share” on Google images
http://pixabay.com/en/driving-car-person-behind-the-wheel-22959/

attached to his brain detected that he was microsleeping. After 20 minutes into the driving, he found himself driving on the grasses off of the track and immediately turned the wheel back onto the track.

Once the experiment was over, the researchers told him that he had fallen asleep a total of 22 times for about 6 seconds each time. 6 seconds may not sound like a lot, but think about not looking at the road while driving for 6 seconds–the possibility of an accident increases tremendously!  Fortunately the experiment was done in a controlled environment while the driver was going only about 15 to 20 mph. Think about all the people who drive sleep deprived everyday while driving with speeds up to 70 mph! Yes, caffeine can help keep you alert, but only for a short period of time. There’s nothing that can replace a good night’s sleep, wouldn’t you agree?