Researchers at Washington University School of Medicine in St. Louis wanted to find the chemicals in processed foods that correlate to diabetes and heart disease. In their study, the scientists used a bacteria called Collinsella intestinal (bacteria that contains an enzyme to break down Fructoselysine), which breaks down fructoselysine into small, harmless parts. According to Ashley R. Wolf, a researcher in the lab, “Fructoselysine is common in processed food, including ultra-pasteurized milk, pasta, chocolate and cereals.” This chemical has been linked to the cause of many diseases of aging.

When Wolf and her team tested the effects of feeding fructoselysine to mice that had Collinsella intestinalis, they not only discovered an increase in the amount of microbes in the stomach, but also found that the mice’s gut microbes had a stronger ability to break down fructoselysine.

“The new tools and knowledge gained from this initial study could be used to develop healthier, more nutritious foods as well as design potential strategies to identify and harness certain types of gut bacteria shown to process potentially harmful chemicals into innocuous ones,” says Jeffrey I. Gordon, a researcher of the lab. 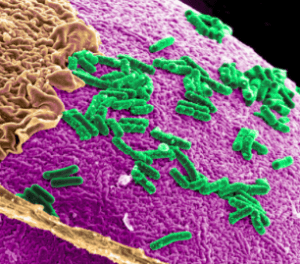 Another study by Harvard University and the University of San Francisco, discovered that raw food was healthier than cooked food. They found that “cooked food allows the host to soak up more calories in the small intestine, leaving less for hungry microbes further down the gut; on the other hand, many raw foods contain potent antimicrobial compounds that appear to directly damage certain microbes.”

Although more research still has to be done to determine the effectiveness of the microbe, these discoveries help lead people into a healthier lifestyle.