While studying the brain there arises the need to activate or inhibit certain cells. The most common process for doing this in the past was optogenetics. Optogenetics is the use of light to activate or inhibit cells. While optogenetics is very precise, it has some drawbacks and limitations. Light is scattered in the brain and to reach deep in the brain scientists usually insert a fiber optic cable which is highly invasive. This practice is still used today, but there has been a new development: sonogenetics. Researchers at the Salk lab have been working on this new technique. Sonogenetics use sound waves, low-frequency ultrasound waves to be more specific, to activate the neurons. This new method allows scientists to reach neurons deep in the subject’s brain without having to perform a surgery to implement a fiber optic cable. It also has the potential to have no effect on the surrounding neurons. In the Salk laboratory, the scientist used worms to study the use of sonogenetics. Worms would normally be impossible to work with as performing surgery to implement a fiber optic cable is nearly impossible, but with the use of sonogenetics the scientist were able to activate certain neurons. The sound waves were aided by microbubbles outside the worm that oscillated in size in conjunction with the wave. The scientist then discovered TRP-4, an ion channel which can be affected by the sound waves. They found that the sounds waves along with the microbubbles can open these channels and activate the cell. Though this process they activated cells that would normally not have been activated by ultrasound. Although it all sounds very promising, sonogenetics has only been used on Caenorhabditis elegans neurons. 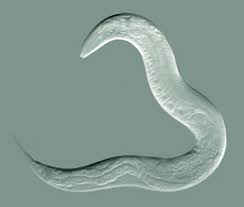 A picture of Caenorhabditis elegans

The next step in the research would be to get the sonogenetics to work in a mammal’s brain. This could potentially lead to therapies that are non-invasive for humans. However, how comfortable would you feel with doctors using sound waves to control neurons in your brain? Sonogenetics sounds very promising and contains a lot of upside, however, the research is not far enough along yet to completely tell.