Mingming and Ningning did it!

The Chinese are one step closer to finding a way to help fix genetic defects in people.

How you make ask? Through findings in crab-eating macaque monkeys. 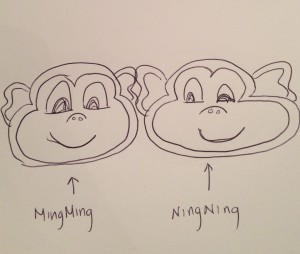 Two twin monkeys, Mingming and Ningning, were the “first primates to have their genes precisely edited using a gene-snipping tool borrowed from bacteria.” Which basically means that this experiment was the first successful alteration of animals’ genes.

Jiahao Sha of Nanjing Medical University and his colleagues conducted this experiment. They did this by using Cas9, a “part of a primitive ‘immune system’ — known as CRISPRs — that defends against viruses by chopping up ones that the bacteria have encountered before and recognize as threats.”

The team of researchers injected Cas9 in a monkey embryo. They also injected RNA molecules “that would guide the enzyme to three genes the scientists wanted to disrupt.” They disrupted cells involved in the immune system, sex determination and metabolism regulation. By doing this, the researchers hoped for the destruction of each cell which didn’t happen all of the time.

Sha and colleagues hope to find out how disease spread throughout the human body. They also wanted to find a bridge in to developing and testing treatments in primates. The monkey originally injected gave birth to 2 baby twins. That is where Mingming and Ningning come into play. How cute and exciting, baby monkeys?

In the two twins, the Nanjig Medical University students found success in 2 of the 3 genes tested.

The most important finding in this whole experiment was that only the genes intended to be disrupted, were disrupted.  Which suggests “CRISPRs could be used to repair some human genes without inadvertently damaging others.”

I for one am pretty jealous of these researchers because not only are they playing with the adorable monkeys, but they are working to hopefully help save many Americans in the future.

How many ligaments did you really tear? For me, it’s now 4! 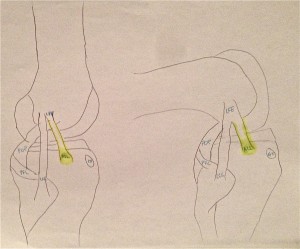 Newfound ligament in the human knee; Photo by Kasey Katz

As of November 5, 2013, a new ligament has been discovered in the human knee by two Belgium biologists, Doctor Steven Claes and Doctor Johan Bellemans.

These doctors were curious as to why patients who have had previous ACL surgery continue to experience sensations where their knee will “give out” during certain activities.

Their curiosity led them to research and ultimately, astonishing results. These two doctors are credited with the discovery of an unknown ligament, now recognized as an Anterolateral Ligament (ALL).

This newfound ligament also suggests a connection with ACL injuries. As studies now show, ACL tears are a product of ALL injuries. Did you tear your ACL? Does that mean you also tore your ALL?

This research could signal a breakthrough in ACL tear repairs.

Which is why these two doctors are already one step ahead; Dr. Claes and Dr. Bellemans are now working on creating a surgical procedure to repair ALL injuries.

Being a patient who previously tore my ACL, MCL, and Meniscus, I found this discovery particularly interesting because chances are… I also tore my ALL.

Learning about this newfound ligament, I now wonder if I will need to get another repair on my knee, later in life, to fix the “giving out” sensation I encounter from time to time.