Lewis Latimer, son of George Latimer a former runaway slave, was born in Chelsea, Massachusetts on September 4, 1848 and passed away at 80 years old in Flushing Queens, New York on December 11th, 1928. Latimer was an inventor and engineer who worked with many great inventors such as Alexander Graham Bell and Thomas Edison. Latimer was not always an inventor though, he began his career in science following the Civil War. At age 15 Latimer lied about his age in order to enlist in the navy to fight on behalf of the Union. After an honorable discharge Latimer returned home to Boston where he worked a low ranking job at a patent office. While working there he taught himself how to draft and mechanical draw by watching other draftsmen in the office. His talent was quickly recognized and he was swiftly promoted from an office boy to a draftsmen, which eventually led him to his career in science. 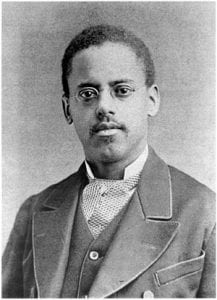 In 1880 Hiram Maxim, Thomas Edisons most competitive rival, hired Latimer to be his assistant manager at the U.S Electric company. Edison had just came out with the first electric lightbulb, but Maxim and Latimer sought to make an even better one so they attacked the main flaw of Edisons lightbulb, the duration that it glowed. Edison’s lightbulb was a glass bulb encased around a carbon wire filament usually made of paper or bamboo, once the filament inside the airless bulb got hot enough it glowed, giving a lightbulb light. To reform this Latimer figured out a way to help the carbon stop breaking. To help protect the carbon filament Latimer encased it in a cardboard envelope. Not only did this cardboard envelope help elongate the longevity of the carbon filament, but it also made the cost of lightbulb production and price drop. Latimer’s reforms to the lightbulb is what ultimately allowed it to have enough lighting and a long enough duration to be placed in homes and put in streetlights. As urbanization continued in the U.S Latimer led a team through major cities, like New York City and and Montreal, to have his lightbulbs installed into government building, railroad stations, and more. 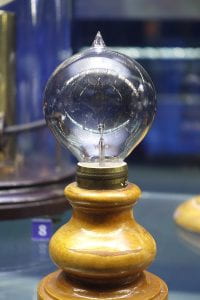 Latimer’s Other Inventions and Conclusion-

Although Latimer’s biggest contribution to science was his carbon filament lightbulb, he also had 7 patents including the design for Alexander Graham Bells’ telephone, an apparatus for cooling and disinfection (air conditioner), and a locking rack for coats, hats, and umbrellas. Latimer has also written off on 3 other inventions that he helped Hiram Maxim invented like the electric lamp and the process of manufacturing carbon. However despite all of his inventions and contributions Lewis Latimer is still a name with as much noteriety as those like Alexander Graham and Thomas Edison. It is extremely disappointing due to the fact that he not only had a mind beyond his years, but he was also a Black man born from two former slaves in the 1880s. I hope that my blog sheds some light on some of Latimer’s amazing work that he completed through his life. I hope you guys enjoyed reading, until next time with monoseanaride!

Dr. Kizzmekia Corbett…the brains behind it all