Throughout history, people have been taught about a select few scientists that are often white men. However, the science field has a variety of others revolutionary scientists that have made great strides in their field, yet are not well known. It is important to study women’s and people of other races or religion’s accomplishment equally in depth.

Alice Augusta Ball was a chemist who developed a successful treatment for Hansen’s Disease (also known as leprosy). Leprosy is a bacterial infection that effects skin, nose linings, and upper respiratory that causes skin ulcers, nerve damage, numbness, weakness in the muscles, and skin lesions. 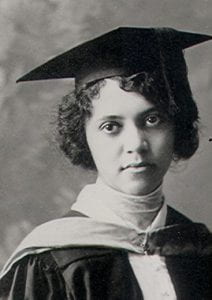 At the time, leprosy was being treated with Chaulmoogra oil, but was unable to be injected, and could only apply it on the skin.  At age 23, Ball tried to purify the oil into chemical compounds (called ethyl esters), so it can be injected and be effective by making it water soluble and able to dissolve in the bloodstream. But, to achieve this goal, the oil needed to be converted to fatty acids first. Ball then realized the acid needs to be frozen for a night so it has enough time for esters to separate, and stop it from degrading due to the temperature. Ball’s work impacted many people with leprosy, saved their lives and lifestyles.

Why Didn’t Ball Get Credit?

Although the Ball Method was the most effective treatments for leprosy at the time, Ball was not given credit. This is because her colleague, Arthur Dean took her findings and put his name on it. Because of this, Ball did not get credit until 1922. The University did not recognize Ball’s work for 90 years, and finally honored her in 2000. Ball was also named one of the most influential women in Hawaiian history in 2016.

Ball was born in 1892 in Seattle, Washington, and her family later moved to Hawaii. Ball attended University of Washington where she received a bachelors degree in pharmaceutical chemistry and later went to work and study at University of Hawaii and the college of Hawaii. She was the first woman to graduate from the college, and the first African American researcher in the chemistry department. Unfortunately, Alice Ball passed away in 1916 at the young age of 24 when she fell ill during her research.

What Do I Think?

I believe, like many others do as well, Alice Augusta Ball is an inspiration to many with her various accomplishments in her short life. Along with dying at just 24 years old, Ball had to face many adversities due to societal constructs and discrimination towards African Americans and woman. Still, though, Ball persevered against all odds and helped advance the world of science. Women like Ball should be celebrated, talked about, and taught to people for all of their contributions to society, not only a select few white men.