As revealed in a fascinating article that details a study conducted by the University of North Carolina at Chapel Hill, a mutated form of the virus has been discovered to be much more susceptible to antibodies produced by antibody drugs. This means that it is more easily disabled by antibodies produced by drugs such as the new vaccine. However, this may not all be good news as this new strain, called D614G, is also much more transmissible. D614G originated in Europe and has quickly become the most prevalent form of the virus. According to professor of epidemiology at UNC Ralph Baric, “The virus outcompetes and outgrows the ancestral strain by about 10-fold and replicates extremely efficiently in primary nasal epithelial cells, which are a potentially important site for person-to-person transmission.” These nasal epithelial cells act as a physical barrier against any pathogens attempting to enter the body and play a significant part in the control of the innate and acquired immune response. As we learned in biology, one method of innate immune response that our bodies have is mucous that traps pathogens. The nasal epithelial cells contain cilia that act to push the mucous and the pathogen contained inside out of the body. This means that if this new virus reproduces exceptionally well within the nasal epithelial cells, then it is extremely transmissible through any expulsion of mucous by either sneezing or coughing. It is also far more capable of bypassing the barrier of the mucous and entering the body. These epithelial cells also help the innate immune system by producing various cytokines. If a virus manages to make it past the barrier defenses, the epithelial cells will secrete cytokines. These cytokines will attract a type of cell called a neutrophil that digests pathogens. This means that these nasal epithelial cells are vital to the innate immune response and having a virus strain reproduce so effectively inside of them is extremely worrying. 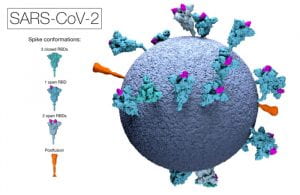 The researchers believe that D614G is so effective at reproducing because it increases the virus’ ability to enter cells. The D614G mutation opens a flap on the tip of one of the spikes on the side of the virus which allows it to infect cells more effectively. However, this mutation also creates a weakness in the virus. When the flap is open, it becomes much easier for antibodies to bind to the spike proteins, preventing the virus from attacking additional cells.

Two researchers from the University of Wisconsin contributed to this study by experimenting with hamsters. To test the airborne aspect of this mutation, the hamsters were placed into different cages and groups so they could not touch and inoculated with either the original strain or D614G. By day two, in the group exposed to the mutation, six out of the eight hamsters were infected with D614G. In the group of hamsters exposed to the original virus, no additional hamsters were infected by day 2. This shows that this D614G is extremely effective at being transmitted airborne. However, the mutation had the same symptoms and effects as the original virus meaning it is not more severe. The researchers have also noted that these results may not be the same in human studies. I think that this study is equal parts of good and bad news. I am glad that the most prevalent form of the virus is much easier to deal with, but it is quite terrifying that it could mutate to be so much more contagious. How do you feel about this new development? Let me know in the comments.

How Is Covid- 19 Really Spread?