Although many college campuses have closed within the past couple of weeks, for the few months they were in session, the general public was introduced to a new procedure for COVID-19 testing: Saliva tests. There are multiple reasons why a saliva test would be more ideal for campuses to use, and it’s not just because the nasopharyngeal swab testing is extremely uncomfortable. 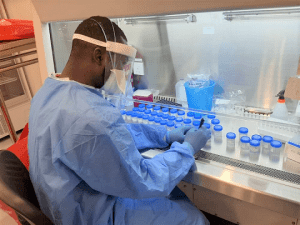 An Image of a man developing nasopharyngeal tests

A nasopharyngeal swab is basically a biological term for the COVID-19 test that goes all the way up your nose. News-Medical actually came out with an article going through the testing procedure, and how the SARS-CoV-2 is detected. The purpose of the swab test is to reach the nasopharynx, which is where nonpathogenic and pathogenic bacteria and viruses lie. It’s also used to test the flu and pneumonia. In fact, UC Davis published that they have just come up with a rapid test that could detect both the flu and COVID-19 in one nasopharyngeal test. This makes it the most convenient method, but it’s more expensive; making this harder to upscale for mass testing). It also requires more supplies, and puts health care workers in close contact with infected individuals. Saliva tests would be a lower cost, but there was uncertainty in its accuracy. The Scientist highlights three main experiments that help better our understanding of saliva testing.

The first experiment was led by Yale epidemiologist, Anne Wylie. Wylie and her colleagues tested the accuracy of swab testing using 70 suspected COVID-19 patients admitted to the Yale-New Haven Hospital. They found that saliva samples contained more copies of the SARS-CoV-2 than swabs. The group concluded by saying that they see potential in the saliva swab; however, this was only tested in one controlled area, and the patients at this point were showing symptoms.

The second experiment, led by Mathieu Natcher, took place throughout the French Guiana. There were 776 participants ranging from (wealthier) villages, forests, and more poor neighborhoods. Natcher discovered that the SARS-CoV-2 virus was still present within saliva for a long period of time, despite climbing temperatures, which makes this idea for situations where testing needs to happen in areas where temperature can’t be regulated. The one downside noticed during this experiment was that saliva testing was less sensitive than nasopharyngeal swabs, which means that it can be harder to pick up the bacteria, if there is less in their system. Therefore, saliva testing may not always be as efficient for asymptomatic carriers or people who just became infected.

Pharmacologist at the University of South Carolina helped develop the school’s saliva test, and reported her findings after school came back in session. She noticed that although saliva may be less sensitive, the repetition of testing these students makes it more possible to catch the infection shortly after it comes. She also ran an experiment on two students living together: one of which had a confirmed COVID-19 diagnosis, and the other was at risk. Both students got tested daily using the nasopharyngeal and saliva swabs for the two weeks. She found that the amount of the virus detected in both tests for the positive patient were the same, leading her to conclude that saliva and nasopharyngeal tests both have the same sensitivity. Banister also explained that not the lower sensitivity coming from the saliva test in comparison to the nasopharyngeal test could be due to the fact that saliva turns over quickly in the mouth, while the nasal cavity and lungs hold the virus for longer. Banister also said because of this saliva tests might be a more accurate depiction of who is actually infectious, because the virus stays in the lungs even after the patient is no longer infectious.

We have come a long way since this article was initially posted, and saliva tests have been released to more of the public for a longer period of time. It is interesting to see how these preliminary tests played a role in whether or not to further release saliva tests.