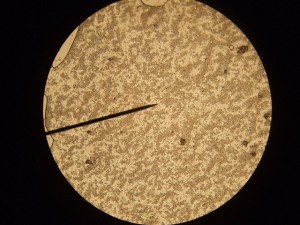 They designed an experiment where they had yeast in flasks of broth where they were being shaken for a day and then left alone for the yeast to settle. Then a drop of the settled yeast was taken and transferred to a new flask where the yeast could continue to grow. This process was continued and would allow the yeast which had evolved to be the densest and to settle furthest down to be carried to the next flask. after a few weeks the scientists observed that the yeast was falling faster and was becoming cloudy at the bottom. When looked at under the microscope the scientists found that the yeast had evolved into snowflake shaped clumps of hundreds of yeast cells stuck together. These cells were not just unrelated clumps since when separated individually, cells would recreate these snowflake shaped clumps. This property of clusters of single celled organisms to make a multicellular like organism is not special to yeast. Another organism called choanoflagellates is a single celled organism that also exhibits these traits.

One of the more amazing parts about this was that to reproduce, branches of the snowflake clump would break off after growing too large. When looked at closer they found that a section of the cells near the branch commit suicide to separate the branch to allow it to grow into a new clump. Being able to create multicellular organisms that had cells willing to commit suicide for the rest of the organism in a matter of weeks was amazing and could mean that the history of single celled organisms evolving into multicellular ones might not be as complicated as previously thought. Even though this form of natural selection was done in flasks, the natural environment could have preferred multicellular organisms over single cellular organisms for a number of reasons.

The Sad Fate Of Salmon