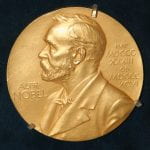 The Nobel Prize in Medicine

On October 7th, it was announced that the Nobel Prize in Medicine would be awarded jointly to scientists William G. Kaelin Jr., Sir Peter J. Ratcliffe and Gregg L. Semenza for their contributions in the discovery of how cells detect and react to the levels of oxygen in their environments. Each contributor will be receiving 1/3 of the prize share for their work in this topic.

Before we are able to understand the gravity of the discovery being awarded one of the world’s most prestigious scientific prizes, let’s set up some essential vocabulary we will need to break this concept down. Firstly, HIF-1α is the main protein that has been found to be essential to the identification of Oxygen. We have known that there exists an EPO gene which encodes for a steroid known to increase levels of Oxygen but the discovery of the HIF-1α protein is what is so astounding. What this protein does is regulate the activity of the EPO gene. Another factor which plays a large role in this discovery is the VHL gene, a gene known to be responsible for preventing occurrences of cancer. It was discovered that VHL had a link to the regulation of oxygen when low levels of the gene were linked to low level of oxygen (hypoxia). However, as more VHL was reintroduced, oxygen 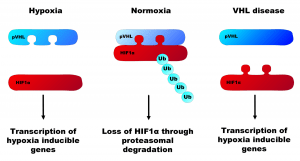 Visual depiction of how HIF-1α works

levels were restored to normal.

How do HIF-1α proteins, VHL genes and EPO genes come together to create an understanding for how cells react to oxygen variation? Well, for HIF-1α to degrade, a peptide known as ubiquitin must link onto the HIF-1α and begin proteasomal degradation. It just so happens to be that VHL codes for a complex which tags proteins with ubiquitin allowing them to degrade. Finally, it was discovered that Oxygen was what binded theses two together, moving ubiquitin from the VHL over to the HIF-1α protein, thus degrading it. In other words, the more oxygen there is present, the more HIF-1α which gets degraded. Finally, the mechanism by which oxygen levels are controlled has been uncovered.

The Men Behind The Discovery

Over the span of 2 decades of research, three scientists were able to form an understanding on how our bodies respond to one of the most essential molecules in biology.

William G. Kaelin Jr. is a professor of medicine at at Dana-Farber Cancer Institute and Brigham & Women’s Hospital Harvard Medical School. As a cancer researcher, Kaelin’s main contribution was in the creation of a full understanding of the VHL disease which allowed for the link between VHL and HIF-1α to be formed.

Sir Peter J. Ratcliffe is the director of clinical research at the Francis Crick Institute in London. Ratcliffe and his team’s main contribution was establishing the connection between VHL and HIF-1α.

Gregg L. Semenza is a professor in genetic medicine at John Hopkins. His work focused on the EPO gene and how it controlled oxygen levels. He found out how oxygen is regulated, leaving only the cause a mystery.

For even more information on the scientists responsible, look into this New York Times article about them.