Dr. Ellen Ochoa is one of most important women in NASA’s history, winning many awards including the Distinguished Service Medal, NASA’s highest award. As a child, the Mexican-American never thought to become an astronaut, as it wasn’t presented as a job women could have. In college, Ochoa considered majoring in music as she is a talented classically trained flutist work but after taking taking various STEM based  courses she decided on Physics. After college, Ochoa was unsure of what to do next ultimately deciding to attend Stanford University due to her mother’s constant emphasis on the importance of education. At Stanford, she earned a master’s degree and doctorate in electrical engineering and began her research on the subject of optics, which involves studying the characteristics and interactions of light.

Ochoa playing her beloved flute while on a mission

Whilst at Stanford, Ochoa got to see Sally Ride (a fellow physics major and Stanford graduate) become the first female astronaut at NASA and that inspired her to apply to be an astronaut after graduating. Ochoa flew her first mission in 1993, making her the first Latina in space as well as NASA’s first hispanic female astronaut. She went on to fly 3 other missions, logging almost 1,000 hours in space.  Whilst in space, Ochoa conducted studies on the Sun’s effect on the Earth’s atmosphere and climate, deploying multiple satellites. After directing the Johnson Space Center for years she has retired now serving on the boards of several influential scientific organizations.

Ochoa’s research took place largely at Stanford as well as at NASA’s Sandia National Laboratory. There she began to develop complex optical analysis systems, which helped to give a more accurate quality of light interactions and can make conclusions about what they are “seeing”. She also developed “optical, computerized recordings and models of events and phenomena in space.” This helped NASA better understand the depths of space as well as led the way for optical systems to be used for automated space exploration. Ochoa was granted patents for optical devices including a system that “inspects objects, a system that identifies and can “recognize” objects, and a system that minimizes distortion (noise) in the images taken of an object.” After conducting this research she moved on to NASA’s Ames Research Center where she surprised 35 fellow scientists working on designing computer systems to be used in space missions. It was this research that got her accepted into the astronaut program where she served as a mission specialist and flight engineer. Ochoa also participated in some research that measured the size of the ozone layer in space helping to reveal the extent of damage from chlorofluorocarbons. This research has helped lead to the phasing out of these dangerous chemicals and these efforts are finally showing positive results.

Today Dr. Ochoa works to inspire others with her story advocating for further involvement of women and people of color in STEM as well as the importance of a quality education. Dr. Ochoa one of my personal idols, showing that not only women, but Latinos deserve a place in scientific history and that with brains and hard work, there are endless possibilities.

LION: The King Of The COVID Vaccines

As the SARS-CoV-2 virus (also known as COVID-19) continues to rage across the world killing millions, more time, effort, and money is being put into researching the best vaccines to help bring the world back to a state of normalcy.  One such vaccine is being developed at the University of Washington using replicating RNA is called LION (Lipid InOrganic Nanoparticle). In its animal trials in July, the vaccine already found some success inducing “coronavirus-neutralizing antibodies” in mice young and old which has given researchers a lot of hope for the future of the vaccine.

One might wonder, why do we need a vaccine at all? Vaccines are used to expose your body to small doses of a virus or in this case by mRNA, which teaches your body to produce the antibodies needed to fight the virus and makes memory cells. The next time you are exposed to the virus, your body will be able to produce the necessary antibodies to a much larger degree, much quicker, for longer so you will be protected from becoming sick.

One of the lead researchers on LION, Professor Deborah Fuller of the University of Washington School of Medicine qualified the goals of a successful COVID-19 vaccine saying it, “will ideally induce protective immunity after only a single immunization, avoid immune responses that could exacerbate virus-induced pathology, be amenable to rapid and cost-effective scale-up and manufacturing, and be capable of inducing immunity in all populations including the elderly who typically respond poorly to vaccines.” This is quite a lot to accomplish but LION lends itself very well to these goals, conquering most of the problems a typical DNA vaccine would have. DNA vaccines work by coding for the antigens which are then exposed to the immune system to create memory cells so the body can treat the virus later. The downsides of a DNA vaccine is sometimes those antigens fail to create an immune response or can even cause the cell to become cancerous when the DNA joins the host cells DNA, disrupting it. There is far less risk with RNA vaccines which occupy the cytoplasm and only interact with ribosomes.

Shown above us a basic drawing of what SARS-CoV-2 virus looks like.

LION is a replicating RNA vaccine, but how does replicating RNA work? RNA codes for spike proteins and ribosomes in the body make the necessary proteins. Replicating RNA allows for more spike proteins and ribosomes to be coded at a greater rate, which produces a greater number of proteins continuously while triggering “a virus-sensing stress response that encourages other immune activation.” For the vaccine the RNA replicates proteins that tell the body to reject the SARS-CoV-2 and attack them “with antibodies and T cells”  which stop the protein spikes on the virus from interfering with the cell. The development of B cells, which remember how to make the antibodies to fight the virus when infected again, as well as T cells is especially critical for the vaccine as they can develop immunity to the SARS-CoV-2 antigens. What makes the LION vaccine special is the nanoparticle it is named after which “enhances the vaccine’s ability to provoke the desired immune reaction, and also its stability.” This makes it more valuable than other vaccines of the same kind as it can achieve effective results with a longer shelf life. It can also be mixed simply using a two vial method as the mRNA component is made separately from the main vaccine formulation. For all these reasons, the scientists are optimistic as the vaccine goes into the next stages of testing that this vaccine could help provide a long term solution to the COVID-19 pandemic.

As COVID-19 vaccines start becoming available to essential workers in the coming weeks and my father prepares to take one, it can be quite unnerving to think about all the potential negative side effects of the vaccine. These vaccines have been developed without the typical ten years of testing, so knowing more about the research behind the vaccines serves as a comfort me and many others. Our future is in these vaccines and research so knowing which we should invest our time and money in is always a good idea.

In a study done by NYU Langone Healthy and the School of Medicine, researchers learned more about the types of proteins that cause the tangles in the brain that cause Alzheimer’s. Alzheimer’s disease is a type of dementia that affects the “memory, thinking, and behavior” of the over 5 million Americans who have it, according the the Alzheimer’s Association. The researchers tested tissue sample of 12 subjects with the disease looking for tau knots to “[examine] the bundles to identify the many proteins tangled within”. 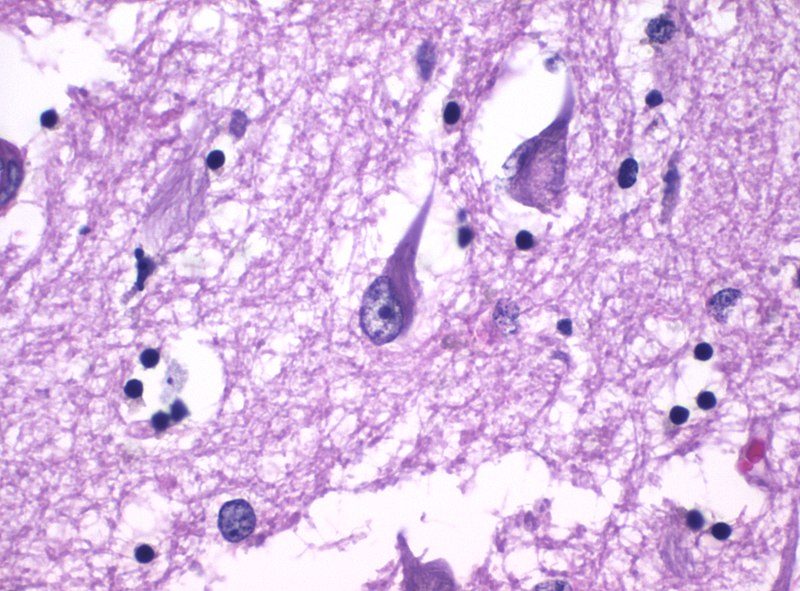 You might be wondering, what is a tau knot? A tau is a protein that exists mostly in nerves that has the objective of stabilizing microtubules. When this protein is defective, it can become tangled with other molecules which leaders to Alzheimer’s disease.

Although neuroscientists already knew that tau tangles can cause neurodegenerative diseases like Alzheimer’s or dementia, they did not know many of the proteins that cause these dangerous knots. After analyzing the brain tissue, the researchers “found 12 proteins that they say have not before been tied to both tau and Alzheimer’s disease.” These knots were made up of 542 different proteins including those involved in the most essential processes of the cell like “energy production”, “the reading of genetic material”, “and cell breakdown and digestion.” These proteins that work to produce ATP and RNA in the processes of cell respiration and gene transcription (which are necessary parts of cell function); these important proteins are involved in the knotting. It is crazy that along with their existence comes the possibility of them destroying all they have created.

Despite the sad nature of this research, this new information comes along with hope for those suffering from this debilitating illness. According to co-lead author Geoffrey Pires, “Now that we have better insight into possible ‘key players’ in neurodegeneration, we may have clearer targets for potential therapies.” As these researchers gain more and more information, they gain a better understanding of Alzheimer’s and in turn, other similar “tau-linked neurodegenerative diseases, such as Pick’s disease.”

I feel Alzheimer’s is an essential disease to learn more about not only because it is incurable and unpreventable, but because 4 members of my own family have suffered from it. As the study’s senior author Thomas Wisniewski said “Alzheimer’s has been studied for over a century, so it is eye opening that we are still uncovering dozens of proteins that we had no idea are associated with the disease.” It is wild to think that something so common and well known, still has so many mysteries to it and that makes it immensely more fascinating and important to learn about.