Dr. Ellen Ochoa is one of most important women in NASA’s history, winning many awards including the Distinguished Service Medal, NASA’s highest award. As a child, the Mexican-American never thought to become an astronaut, as it wasn’t presented as a job women could have. In college, Ochoa considered majoring in music as she is a talented classically trained flutist work but after taking taking various STEM based  courses she decided on Physics. After college, Ochoa was unsure of what to do next ultimately deciding to attend Stanford University due to her mother’s constant emphasis on the importance of education. At Stanford, she earned a master’s degree and doctorate in electrical engineering and began her research on the subject of optics, which involves studying the characteristics and interactions of light. 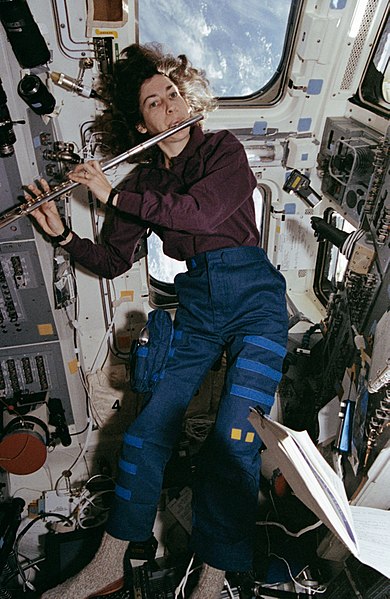 Ochoa playing her beloved flute while on a mission

Whilst at Stanford, Ochoa got to see Sally Ride (a fellow physics major and Stanford graduate) become the first female astronaut at NASA and that inspired her to apply to be an astronaut after graduating. Ochoa flew her first mission in 1993, making her the first Latina in space as well as NASA’s first hispanic female astronaut. She went on to fly 3 other missions, logging almost 1,000 hours in space.  Whilst in space, Ochoa conducted studies on the Sun’s effect on the Earth’s atmosphere and climate, deploying multiple satellites. After directing the Johnson Space Center for years she has retired now serving on the boards of several influential scientific organizations.

Ochoa’s research took place largely at Stanford as well as at NASA’s Sandia National Laboratory. There she began to develop complex optical analysis systems, which helped to give a more accurate quality of light interactions and can make conclusions about what they are “seeing”. She also developed “optical, computerized recordings and models of events and phenomena in space.” This helped NASA better understand the depths of space as well as led the way for optical systems to be used for automated space exploration. Ochoa was granted patents for optical devices including a system that “inspects objects, a system that identifies and can “recognize” objects, and a system that minimizes distortion (noise) in the images taken of an object.” After conducting this research she moved on to NASA’s Ames Research Center where she surprised 35 fellow scientists working on designing computer systems to be used in space missions. It was this research that got her accepted into the astronaut program where she served as a mission specialist and flight engineer. Ochoa also participated in some research that measured the size of the ozone layer in space helping to reveal the extent of damage from chlorofluorocarbons. This research has helped lead to the phasing out of these dangerous chemicals and these efforts are finally showing positive results.

Today Dr. Ochoa works to inspire others with her story advocating for further involvement of women and people of color in STEM as well as the importance of a quality education. Dr. Ochoa one of my personal idols, showing that not only women, but Latinos deserve a place in scientific history and that with brains and hard work, there are endless possibilities.