Memory B cells are produced in the bone marrow and are mainly found in the lymph nodes and the spleen following infection. However, a recent discovery reveals that they can also be located in the lungs. These memory B cells located in our lungs are highly effective in blocking SARS-CoV-2 virus entry to the respiratory tract!

In AP Biology class, we learned that memory B cells allow immunity to viruses in the future. These cells memorize the characteristics of the antigen (virus) that activated their parent B cell during the infection—hence their name, memory B cell. This triggers a fast, strong, and long-lasting secondary immune response if the memory B cell encounters the same antigen again.

Aiming to reach a greater understanding of memory B cells’ role in the long-term immune response to respiratory infections, scientists studied mice infected with either influenza or SARS-CoV-2 viruses. The scientists tracked the appearance of memory B cells after infection using fluorescent markers— but not the type we use to draw and color! These fluorescent markers (shown in the image below) are specific molecules that bind to form fluorophores. Fluorophores can re-emit the light that they absorb and emit color, allowing scientists to track particular cells. After tracking the memory B cells, the team performed a single-cell transcriptome analysis, studying the genes expressed in each cell of the sample, which helped them study the function of the animal’s cells.

The research revealed groups of memory B cells in the bronchial respiratory mucosa that had formed after the virus left the mice’s bodies. The memory B cell groups were located in a strategic position in which they would be in direct contact with any new virus that entered the lungs! 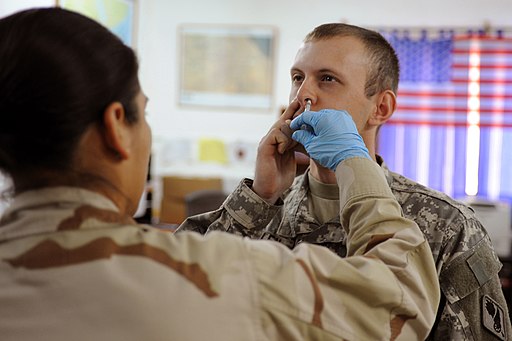 I presume that intranasal vaccination would significantly decrease COVID-19 rates in our nation, as it would better protect us from the initial infection itself. Scientists should continue to work toward finding an effective intranasal vaccine for COVID-19. Do you agree? I would love to hear your thoughts; please feel free to leave a comment!

Why is SARS-CoV-2 able to evade our immune system?