For Cancer Cells, it’s Halloween All Year Long– New Research Finds That They Masquerade as Normal Cells by Covering Themselves in “Sugary Costumes”

Dr. Rachel Willand-Charnley and her team of biochemist researchers at South Dakota State Univerity have achieved a “sweet victory” in cancer research. Their recent findings determine how cancer cells utilize sugar to deceive our immune systems. Their research suggests that cancerous cells mimic normal cells’ glycans due to genetic mutations, and because of this similarity, the immune system then confuses the cancer cell for a normal, healthy cell. This is because glycans on cell membranes of the cell are inspected by T-cells belonging to the immune system. 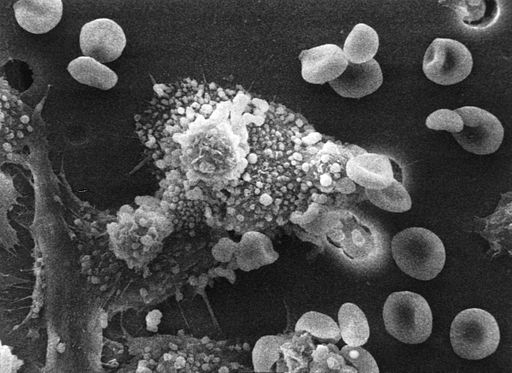 This is revolutionary to understanding the behavior and function of cancer cells which could help create more effective cancer treatments. Potential new treatment methods include stripping or altering the sugary layer of the cancer cell, allowing the immune system to recognize it as a threat and take care of it itself.

Milestones in cancer research are significant because as of right now, there is no cure for it. As we have learned in AP Biology, normal cells comply with signals that direct themselves into apoptosis, or programmed cell death. This process involves the expulsion of lysosomal enzymes into the cytosol which kills off the cell. This occurs when the cell is deemed inefficient or unable to function. If cancerous cells are detected by the immune system, those cells could avoid destruction by evading apoptosis signals and continue to progress within the human body which often leads to death.

How could a cancer cell bypass something like this? Well, it seems that their newly adapted sugary coating could play a role in avoiding those signals. This is because T-cells from the immune system inspect glycans in the extracellular matrix for deviations. When deviations are present, an immune response is triggered, which could also trigger apoptosis of the deviated cell. So, the modified glycans on the cancer cell’s extracellular matrix help cancer evade a process like apoptosis.

Isn’t it astonishing that a single genetic modification could actually make cancers resistant to immunotherapy and chemotherapeutics? What do you think about this discovery?